The elderly German recluse who kept a secret stash of art, including masterpieces looted by the Nazis during World War II, has died after a heart operation.

Authorities stumbled upon Cornelius Gurlitt's trove of paintings and drawings in 2012 after a routine check turned up wads of cash, triggering a tax inquiry.

The collection is worth an estimated 1 billion euros and included pieces by Chagall, Toulouse-Lautrec and Picasso. 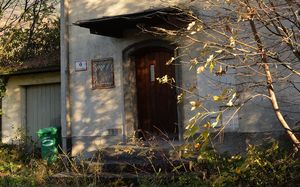 Cornelius Gurlitt's Salzburg house, where some of the works were kept. Photo: AFP

The hoard of 1280 works was put together by Mr Gurlitt's father - an art dealer put in charge of selling what Adolf Hitler called "degenerate" art to help fund the Nazis' war effort.

It remained undetected for decades in Cornelius Gurlitt's Munich flat and a house over the Austrian border in Salzburg. He sold pieces occasionally to finance his quiet lifestyle and his healthcare.

"I haven't loved anything more than my pictures in my life. But hopefully it will all be cleared up soon and I will finally get my pictures back," he told German magazine Der Spiegel in a rare interview last November, when he was already very frail.

The collector's spokesman, Stephan Holzinger, said the 81-year-old had decided to return home, looked after by his doctor and a nurse after a complicated heart operation, and spend his final days in the Munich flat that once housed part of his beloved collection.

A lawyer for one US-based claimant said Mr Gurlitt's death should mean German authorities have fewer reasons for delaying the return of looted artworks to their rightful heirs.

"Some of the excuses that Germany was using are now out of the way - for example, that there's an active investigation regarding Mr Gurlitt's potential tax evasion, and that Mr Gurlitt may have a claim or something," said August Matteis, a Washington-based attorney.

Cornelius Gurlitt agreed to cooperate with authorities to determine if any of the art had been stolen or extorted from its original owners, including Jewish collectors fleeing the Holocaust, under an agreement that permitted a task force to research the works of suspicious provenance while others were returned to him.