Nigerian security forces still do not know where more than 200 girls were abducted from their school three weeks ago, are being held. 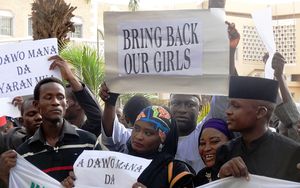 President Goodluck Jonathan has spoken for the first time since their disappearance amid growing criticism of the response. His government has faced increasing anger from the public.

"We promise that anywhere the girls are, we will surely get them out," he said in a live TV broadcast.

Despite searches by the army and the air force, the president said the girls had not been found.

Mr Jonathan said the government has asked the United States, France, Britain and China, for help.

"It is a trying time for this country ... it is painful," he added.

The BBC reports the Boko Haram group, whose name means "Western education is a sin", is believed to be behind the kidnapping of the girls from their school in Chibok on 14 April.