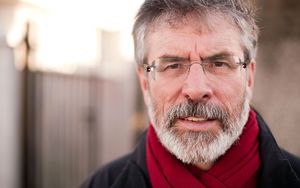 Mr Adams was detained on Wednesday for questioning about the abduction and murder of a woman in 1972, as well as any involvement he had with the Irish Republican Army.

Police said a file will be sent to the public prosecutor's office.

Jean McConville, 37, a widow and mother of 10, was abducted from her home in west Belfast, interrogated, shot in the back of the head and secretly buried by the IRA, after being wrongly accused of informing to the security forces.

Mr Adams, 65, has always denied involvement in the killing.