One of the most prominent politicians in Northern Ireland, Sinn Fein leader Gerry Adams, has been arrested.

He is being questioned in connection with the abduction and murder of Jean McConville who disappeared in 1972. Mr Adams denies any involvement. 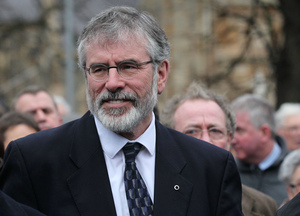 Gerry Adams was being questioned in connection with a 1972 murder. Photo: AFP

Mrs McConville, a 37-year-old widow and mother of 10, was abducted from her flat in the Divis area of west Belfast and shot by the IRA. Her body was recovered from a beach in County Louth in 2003.

Speaking before his arrest on Wednesday Mr Adams said he was innocent of any part in the murder.

Police said a 65-year-old man presented himself to Antrim police station on Wednesday evening and was arrested.

In a statement, Sinn Fein said Mr Adams had last month said he was available to meet police about the Jean McConville case and that meeting was now taking place.

Mrs McConville was kidnapped in front of her children after being wrongly accused of being an informer, the BBC reports.

Last month, Ivor Bell, 77, a leader in the Provisional IRA in the 1970s, was charged with aiding and abetting the murder. There have also been a number of other arrests over the murder recently.

The case against Bell is based on an interview he allegedly gave to researchers at Boston College in the US.

The Boston College tapes are a series of candid, confessional interviews with former loyalist and republican paramilitaries, designed to be an oral history of the Troubles.

The paramilitaries were told the tapes would only be made public after their deaths.

However, after a series of court cases in the United States, some of the content has been handed over to the authorities.