Tornadoes have ripped through parts of the United States for a second day destroying homes and businesses and killing at least 21 people. 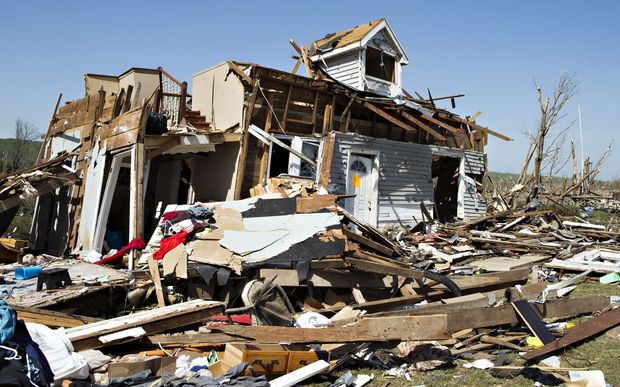 A ruined home in Vilonia, Arkansas after a tornado tore through the area for the second time in three years. Photo: AFP

The latest set of tornadoes touched down on Tuesday in the southern state of Mississippi with the city of Tupelo hardest hit.

One person was killed and witnesses say homes and businesses have been destroyed. Power has been cut to much of the city and officials have imposed a curfew.

Greg Flynn from Mississippi emergency management said an estimated 15 tornadoes have touched down.

Most of the deaths from the severe storm system occurred on Monday when tornadoes tore through a number of states including Arkansas, Iowa and Oklahoma. The BBC reports 14 people were killed in the suburbs of the Arkansas capital, Little Rock.

Emergency crews have been digging through the rubble for survivors.

At least 16 people died in Arkansas, Iowa and Oklahoma - 14 of them in the suburbs of Little Rock, Arkansas, the BBC reports.

Arkansas Governor Mike Beebe said the storm "may be one of the strongest we have seen".

"We don't have a count on injuries or missing. We're trying to get a handle on the missing part," he said.

Forecasters have warned millions of people to prepare for more severe storms across the central and southern US.