An Egyptian court has sentenced the leader of the outlawed Muslim Brotherhood, Mohamed Badie, and 682 supporters to death.

The Brotherhood, in a statement issued in London, described the ruling as chilling and said it would "continue to use all peaceful means to end military rule". 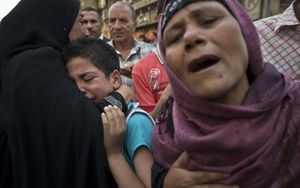 Some relatives collapsed outside the courtroom in Egypt's southern province of Minya. Photo: AFP

Mohamed Badie, considered a conservative hardliner, was charged with crimes including inciting violence that followed the army overthrow of Mursi, who is also on trial on an array of charges.

As word spread of the sentences, relatives screamed and cried outside the court in the town of Minya. Others collapsed on the street as soldiers with AK-47 assault rifles standing on an armoured vehicle looked on.

Tough measures against the Brotherhood suggest the authorities still see it as a major threat, even though most of its leaders and thousands of members are behind bars, Reuters reports. Authorities are aware that the movement founded in 1928 has survived repression under successive Egyptian autocrats.

In a separate case, a court affirmed death sentences on 37 others. The rulings were part of a final judgement on 529 Muslim Brotherhood supporters condemned last month. The remaining defendants were jailed for life, judicial sources said.

Death sentence recommendations in the case involving Mr Badie will be passed on to Egypt's Mufti, the highest religious authority. His opinion can be ignored by the court. The rulings can be appealed, and many defendants are on the run.