The last letter to be written on the Titanic was sold on Saturday for £119,000 at an auction in England. 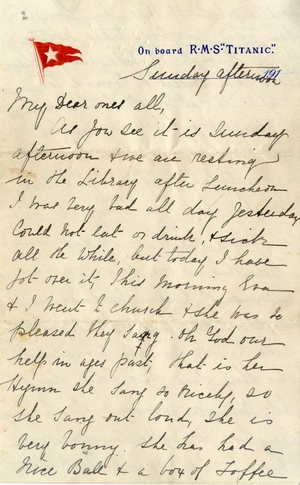 A page of the only known letter written on board the Titanic on the day it struck an iceberg and sank. Photo: AFP / Henry Aldridge & Son

The letter was written on 14 April, 1912, by survivors Esther Hart and her daughter Eva, aged seven, eight hours before the ship hit an iceberg and sank. It was meant for her mother in Chadwell Heath, east London.

It was written on stationery headed "On board RMS 'Titanic'', complete with an envelope embossed with the White Star Line flag.

The Titanic sank on the fifth day of its maiden voyage from Southampton to New York.

The BBC reports the letter survived only because it was in the pocket of her husband's coat which he gave her to keep warm.

Mrs Hart wrote that they were enjoying the "wonderful' journey". She said they were likely to arrive in New York early because of the speed the ship was doing.

Her husband Benjamin died along with more than 1500 people in the disaster.

The letter was auctioned at Henry Aldridge & Son of Devizes on Saturday.

The BBC reports Titanic memorabilia continues to be big business. A menu from the day of the disaster was sold for £76,000, while a violin played as the ship sank went for £900,000.