The 83-year-old Briton is accused of giving a $US45 million bribe to a German banker to secure the sale of a stake in the F1 business to a company he favoured. 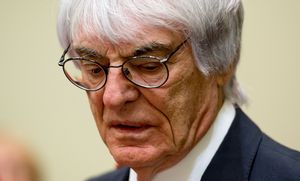 Mr Ecclestone admits paying Gerhard Gribkowsky, who is serving a jail sentence for receiving the payment, but has denied any wrongdoing and say he will fight to clear his name.

He continues to run the F1 business on a day-to-day basis despite the charges. To alleviate his workload, however, Mr Ecclestone has stood down from a number of F1-related positions until the case concludes, the BBC reports.

Asked by a journalist outside the court whether he was confident of victory, Mr Ecclestone replied: "I'm confident the sun is shining."

German prosecutors allege that he bribed Mr Gribkowsky, who was on the board of Bayern Landesbank, to ensure that F1 was sold to a private equity group of Mr Ecclestone's choice.

The allegation is that by securing the sale of the stake to a company Mr Ecclestone favoured, he would remain in charge of Formula 1 and its commercial rights, broadcast payments and sponsorship deals. The payments were made between July 2006 and December 2007.

If convicted, Mr Ecclestone - one of Britain's richest men who transformed Formula 1 into a lucrative sport watched by 450 million television viewers globally - could face up to 10 years in jail.