Rival Palestinian factions PLO and Hamas have announced a reconciliation deal, saying they will seek to form a unity government in the coming weeks. 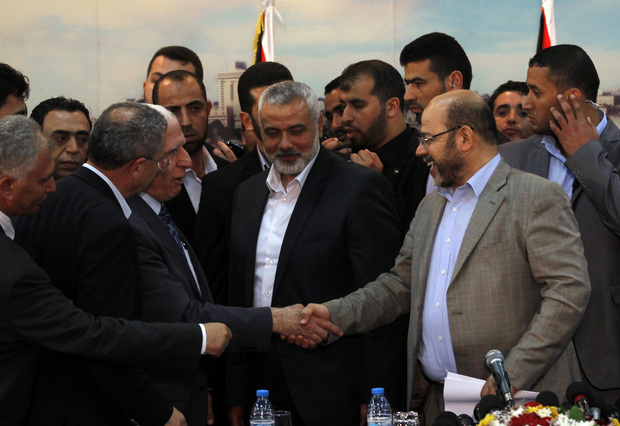 "This is the good news we tell our people: the era of division is over," Hamas prime minister Ismail Haniyeh said to loud applause at a Palestinian press conference also attended by representatives of the PLO.

Israel said after the announcement that Abbas had chosen Hamas over peace, and cancelled a session of US-brokered talks with the Palestinians that had been scheduled for Wednesday night in Jerusalem.

Prime Minister Benjamin Netanyahu said in a statement released by his office that President Abbas "chose Hamas and not peace. Whoever chooses Hamas does not want peace."

Along with the United States and the European Union, Israel views Hamas as a terrorist organization, and says Mr Abbas' efforts to unify with the group show he is not serious about extending the troubled negotiations, Reuters reports.

The talks, aimed at ending its decades-old conflict with the Palestinians and establishing a Palestinian state in the West Bank and Gaza, are scheduled to end on 29 April. 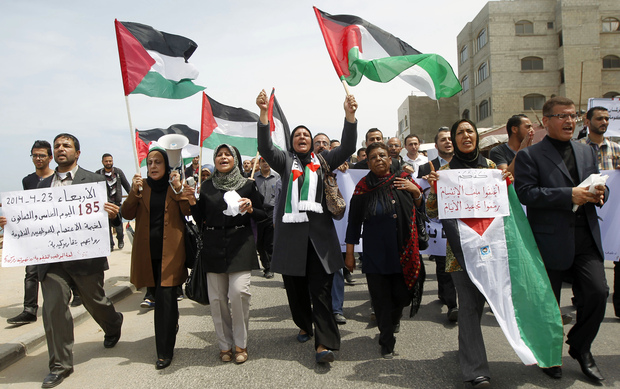 Palestinians demonstrate in the Gaza Strip in support of the new attempt at reconciliation Photo: AFP

Palestinians have long hoped for a healing of the political rift between the PLO and Hamas, which won a Palestinian election in 2006 and seized control of the Gaza Strip from forces loyal to Mr Abbas in 2007.

Since 2011, Hamas and Fatah have failed to implement an Egyptian-brokered unity deal because of disputes over power-sharing and the handling of the conflict with Israel.

Hamas has battled Israel, which it refuses to recognise, while Mr Abbas's Fatah party has remained in control of the Palestinian Authority in the occupied West Bank and pursued years of fruitless talks with Israel.

Palestinian president Mahmoud Abbas said the unity pact would not interfere with peace efforts. "There's no contradiction at all between unity and talks, and we're committed to establishing a just peace based on a two-state solution," he said in a statement following the deal.

Foreign ministers of Egypt and Qatar welcomed the deal. Reuters reports the approval of the two influential Arab states implied the agreement had backing from the region as a whole.