The Vatican has dismissed allegations that Pope John Paul II - who it will declare a saint on Sunday - turned a blind eye towards one of the Catholic Church's most damaging scandals. 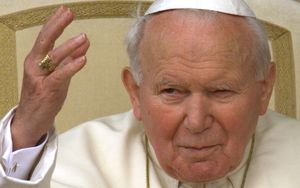 John Paul is accused by a number of commentators of failing to come to grips with the sexual abuse crisis and highlighted by the Vatican's warm welcome to a priest who became known as a serial abuser.

More than 1 million people are expected to attend the ceremony at the Vatican, at which Pope John XXII, who reigned from 1958 to 1963, will also be made a saint.

John Paul is being fast-tracked to sainthood, only nine years after his death, and an all-time record, the BBC reports.

The priest in charge of the canonisation process has shrugged off claims that John Paul II didn't grasp the seriousness of the crisis that became public towards the end of his pontificate. He died in 2005.

Father Marcial Maciel, a Mexican priest who founded a Catholic religious order called the Legionaries of Christ, not only had a history of abusing young seminarians and of drug addiction, but fathered several children from at least two different women.

Father Maciel had for many years been a welcome visitor at the Vatican.