A Cairo court has been shown video and audio evidence in the trial of three al-Jazeera journalists accused of terrorism-related offences.

But observers inside the court said the prosecution evidence was difficult to follow or to understand. 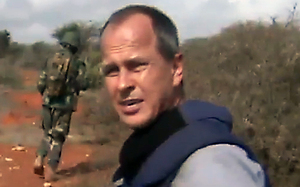 Correspondents said the most prominent video clip was by another al-Jazeera journalist who is not on trial.

They appeared in the Cairo court on Tuesday along with other Egyptian students and activists being tried with them.

Defence lawyers complained they were unable to understand some of the recordings being played because of poor technical quality.

While the recordings were played, defendants talked among themselves in the caged dock.

The trial was later adjourned until 3 May and bail for the defendants was denied, reports from the court said.

A fourth al-Jazeera reporter, Abdullah al-Shami, who works for the network's Arabic channel, has been detained since August but not charged.

Egyptian authorities accuse the journalists of aiding the Islamist Muslim Brotherhood, which has been banned as a terrorist group.