Win Tin, a veteran of Myanmar's pro-democracy movement and the longest-serving former political prisoner, had died at the age of 85.

The journalist who helped set up the National League for Democracy (NLD) with Aung San Suu Kyi died of kidney failure. 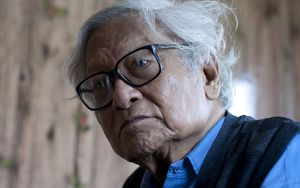 He served 19 years in prison under Myanmar's military rulers for his activism, but was released in 2008 as part of a general amnesty six years ago. He kept wearing his blue prison shirt as a sign of protest against military rule.

In April last year, Win Tin told the BBC: "When I was released, there are about 500 or so political prisoners ... behind the bars. I said that I am going to wear it in the future. So long as these political prisoners are behind bars, I must wear this shirt and this uniform, the colour of the prison, you see, blue colour. I want to show my solidarity with them."

The NLD boycotted the polls, but then re-entered the political fold as the government embarked on a process of reform that saw some political prisoners freed and media censorship relaxed. It has a small presence in parliament and its key focus is the general elections due in 2015.

A spokesperson for the party described Win Tin as a "great pillar of strength".

"His demise at this important political juncture of transition is a great loss not only to the NLD but also to the country. We are deeply saddened,'' Nyan Win said.