The third officer was at the helm of a South Korean ferry when it capsized and the captain may have been away from the bridge, investigators say.

Divers have entered the ship on Friday as hopes fade for hundreds of people believed trapped inside. Rescue services are also pumping oxygen into the submerged vessel, trying to create air pockets in the slim hope that some may have survived. 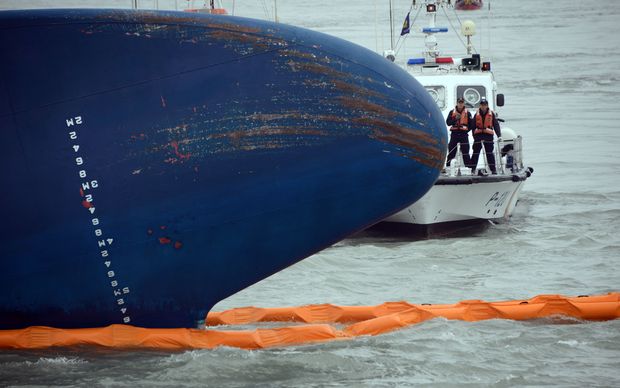 Twenty-eight passengers are officially listed as dead, 179 have been rescued and 268 are missing, presumed trapped in the Sewol. Many unaccounted for are schoolchildren who were on a routine trip from the Korean mainland to the holiday island of Jeju on Wednesday morning when the ferry sank carrying 475 passengers.

Scores of ambulances arrived at the port on Friday. Three bodies were removed from a Coastguard boat and officials said they had been found in the ferry. The rest of the operation has been hampered by atrocious weather conditions, the BBC reports.

A team of divers searched the bridge of the ferry and its restaurant, but haven't found any survivors. Most of the missing students are believed to have been on a different floor.

South Korean president Park Geun-hye visited the wreck and said that time was running out and every minute and every second was critical.

The accident happened in calm, shallow waters and investigators have focused on the role of the ship's 69-year-old captain Lee Joon-seok and the actions of the crew as the ferry appeared to have a clean safety record, Reuters reports.

"He (the captain) may have been off the bridge. .. And the person at the helm at the time was the third officer," Park Jae-eok, an official investigating the accident, told a news conference on Friday.

Parents of missing schoolchildren blamed the ship's captain for the tragedy after he and shipping company officials made emotional apologies for the loss of life. "I am really sorry and deeply ashamed. I don't know what to say," the captain said on television.

Witnesses have said that Mr Lee and some of the crew left the vessel while others instructed passengers to remain in place as it sank in just over two hours some 25km southwest of Jindo, a large South Korean island connected to the mainland.

The captain faces criminal investigation, which is standard procedure in South Korea. Mr Lee and the company that owns the ship have apologised for the loss of life, although neither has admitted responsibility. Mr Lee has not made any public statement on whether or why he may have left the vessel before many of the passengers.

A vice-principal rescued from the ferry has been found dead. Police believe he took his own life. The body of Kang Min-Kyu was found near a gymnasium where relatives of those missing in the disaster have been staying, AFP reports.

Of the 475 people on board the ferry when it capsized, 352 were students from Danwon High School in Ansan city, just south of Seoul.