New South Wales is to have a new premier, following the sudden resignation of Barry O'Farrell. 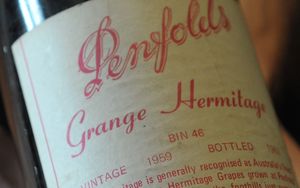 A bottle of Penfolds Grange 1959 at Wine House in Melbourne. Photo: AAP

Mr O'Farrell quit on Wednesday morning when a letter presented to a corruption hearing revealed he had accepted a $A3000 bottle of wine from a water company executive in 2011 - something he had previously denied.

Mr O'Farrell was recalled to the Independent Commission Against Corruption on Wednesday afternoon to address the handwritten note and clarify what he told the inquiry on Tuesday.

He said that he still could not recall receiving the bottle, even after reading the note, which he confirmed was in his handwriting.

Mr O'Farrell said he does not remember taking possession of the bottle of Grange, which had a vintage dated from his birthday, nor what had happened to it.

The ABC reports Courier documents were tendered to ICAC on Wednesday showing that the Grange turned up at Mr O'Farrell's home on 20 April, 2011, and was left at the door as directed, but the Premier said that still did not jog his memory.

"The regret for me is having the letter and the envelope; it still does not spark a recollection," he said.

"I read the note and accept it is my handwriting, but I still have no recollection about receiving the wine."

However, he apologised for misleading the inquiry in evidence on Tuesday.

The ABC reports state treasurer Mike Baird is expected to be the next premier.