The South Korean government has set up an investigation into the ferry disaster amid anger from grieving relatives. Nine people have been confirmed dead but almost 300 are missing.

Most of the 475 passengers on board the Sewol were students and teachers from the same high school on a four-day field trip. The vessel was travelling from Incheon Port, in the north-west, to the southern resort island of Jeju when it made a distress call about 9am on Wednesday (local time). 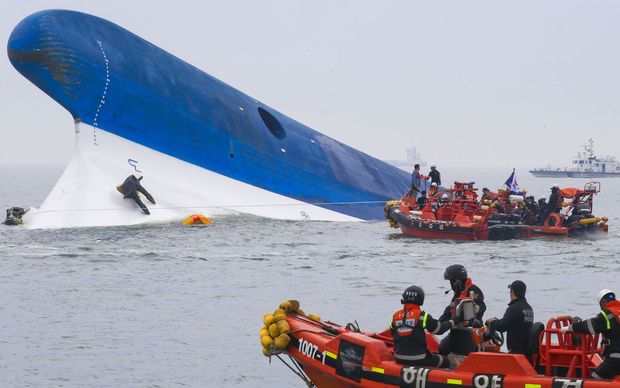 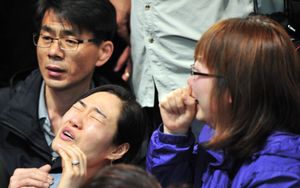 Distraught relatives of ferry passengers have maintained an agonising vigil on shore waiting for any news. Photo: AFP

Officials say 179 passengers have been rescued, but 284 remain unaccounted for and hopes they have survived are fading. Dozens more have been injured.

The South Korean Coastguard says the ferry veered off its course and into an area of shallow reefs and strong underwater currents off the south-west coast. It listed at a severe angle and flipped over, leaving only a small part of its hull visible above water. Witnesses described hearing an impact before the ship went down.

Some of the passengers managed to jump into the ocean, wearing life jackets, and swim to nearby rescue boats and commercial vessels. But several survivors have said that they were told by crew members not to move, the BBC reports.

Families are waiting desperately for any news, with many relatives gathered at a harbour in Jindo. Others are at the gymnasium of the school many of the missing attended. There is a growing sense of frustration and many are asking how a modern ferry on a routine trip could have sunk so quickly.

The focus of the search operation is the wreckage of the Sewol, but currents and poor visibility on Thursday made it difficult for divers to get inside the hull to search air pockets. Dozens of vessels are involved in the search and a United States warship has been sent to the scene.

Authorities say they are now questioning the captain and his crew to get some answers. The South Korean Ministry of Oceans and Fisheries has sent investigators to where the ferry went down.

The team has said it did not sink in an area with rocky shoals or shallow reefs and the ferry is unlikely to have hit rocks, given the water where it sunk is 30 metres deep and just six metres of the ferry's hull is submerged while travelling, the ABC reports.

The investigation team said the exact cause of the sinking will be revealed when the hull is salvaged and its voyager data recorder is retrieved.

British marine salvage expert John Noble told the BBC remaining survivors in the ferry would have needed access to oxygen to stay alive.

"There's a lot of evidence that it hit something - there was a thump or a thud - and this would suggest that she came into contact either with the seabed or a submerged object like perhaps a container. That would almost certainly reach the watertight hull."

CNN reported earlier on Thursday that the mother of one of the passengers has received a text message from her missing son saying there are still survivors inside the ferry. However, it is unclear whether the message was received in real time or whether it was sent earlier and its delivery was delayed.