Boston has paid solemn tribute to the victims and survivors of the marathon bombings, observing a moment of silence and raising the United States flag exactly one year after the attacks.

Vice-President Joe Biden led a tribute just steps from the scene of the attack that left three dead and more than 260 others wounded after the bombs sent metal fragments flying through the crowd. 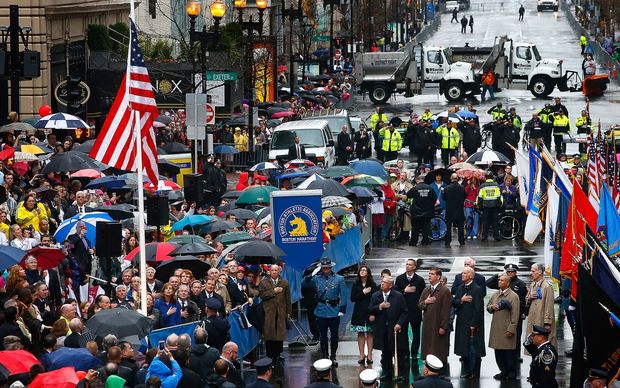 "You have become the face of America's resolve, not unlike what happened on 9/11," Mr Biden told the survivors, relatives of victims and emergency workers who responded to the carnage on 15 April 2013.

When this year's marathon takes place on Monday, Mr Biden said it would send a message "not just to the rest of the world but to the terrorists that we will never yield, we will never cower".

Just hours later, nerves were frayed when hundreds of people had to be evacuated after two unattended backpacks were found at the scene of the twin bombings, AFP reports.

The Boston Police Department detonated the backpacks and said a male suspect had been taken into custody.

The attacks in the northeastern city of nearly 1 million last year were allegedly carried out by two brothers of Chechen descent who had lived in the United States for years. The brothers allegedly hid the explosive devices in backpacks.

In Washington, President Barack Obama and his staff observed a moment of silence in the Oval Office, a White House official said.

Dzhokhar Tsarnaev, who is now 20, and his 26-year-old brother Tamerlan were identified thanks to pictures and video footage and eventually cornered by police after a four-day manhunt that paralysed the city.

Tamerlan died after an exchange of fire with police, and Dzhokhar was wounded and captured. The younger Tsarnaev, a naturalised US citizen, will go on trial in November this year and could face the death penalty if convicted.