The Solomon Islands has asked the Australian government to send a helicopter to assess any damage caused by a major earthquake which struck 300 kilometres from the capital Honiara.

The shallow 7.6 quake was centred south-east of the Solomons at a depth of 29 kilometres. It was initially recorded by the US Geological Survey (USGS) as 8.3 magnitude.

Solomon Islands National Disaster Management Office director Loti Yates said a helicopter would be able to reach isolated areas disaster officials had not yet heard from. He said some communities affected by flooding following a severe tropical storm were also hit by the earthquake.

A tsunami warning for Solomon Islands, Papua New Guinea and Vanuatu was cancelled after only very small tsunami wave activity, had been measured at two reading stations near the epicentre, the Pacific Tsunami Warning Center said.

Mr Yates said while the tsunami warning had been lifted, the office was still asking people in coastal areas to move to higher ground. There had been confirmation of three small waves in Ariki, on the island of Owariki.

A series of aftershocks followed the quake, the strongest a magnitude 5.9, hit the region shortly afterwards, USGS said.

New Zealand's Ministry of Civil Defence and Emergency Management had also withdrawn its tsunami potential threat advisory for all New Zealand coastal areas. However the ministry said there would be stronger and unusual currents, and is asking people on beaches and in boats to be particularly careful.

The area closest to the epicentre of the earthquake has escaped major damage. But a Solomon Islands aid worker said many of the 10,000 people still in evacuation centres after major flooding 10 days ago were terrified when the quake struck on Sunday morning.

Save the Children emergencies manager in the islands Graham Kenna said there had been no reports of major damage so far, but the agency is yet to have an assessment back from the worst-hit area, South Malaita.

He said the Solomons' National Disaster Management Office has asked the Australian government to send a helicopter to assess the damage in South Malaita, due to its isolation.

Mr Kenna said residents fled for higher ground when the quake struck, including many of those who were in the evacuation centres.

Another aid worker in Solomon Islands said some residents are feeling overwhelmed by the latest in a series of natural events.

The country director for Oxfam, Katie Greenwood, said a quake had hit Bougainville in neighbouring Papua New Guinea on Friday night claiming at least one life and people were already very tired from working round the clock to get the islands' infrastructure up and running after devastating floods.

"When you get a series of events happening like this it really does dent that kind of ability to bounce back."

Police commander of Makira-Ulawa province Peter Sitai said he had received reports of a two-metre wave at the eastern tip of Makira, but no one has been hurt.

Mr Sitai said residents were rattled by the quake which went for almost one minute.

He said disaster management co-ordinators would head into the province's more isolated areas on Monday to assess the damage. 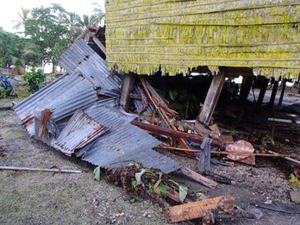 A New Zealander living in the Solomon Islands said the earthquake jolted him awake and he feared it could cause major destruction.

Ken Lewis, who is working in the capital Honiara as part of Volunteer Services Abroad, said he and four other New Zealand volunteers were woken by the tremor and were relieved when the shaking did not intensify.

Journalist Dorothy Wickham in Honiara told Radio New Zealand's Sunday Morning programme the quake was shallow, low and rolling and had the potential to cause destruction.

The Solomon Islands straddles the so-called "Pacific Ring of Fire," a highly seismically active zone where different plates on the earth's crust meet and create a large number of earthquakes and volcanoes. A powerful 8.0 magnitude quake in 2013 in a similar area generated a local tsunami that killed at least five people.

The country is still recovering from flash floods on 3 April that killed more than 20 people and destroyed infrastructure on Guadalcanal.