Lawmakers in Crimea have adopted a new constitution, taking another step to cement the region's absorption into Russia. 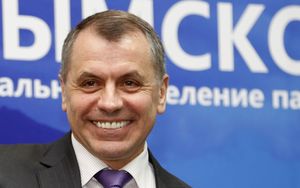 Pro-Moscow legislators are eager to complete the region's integration into Russia since a referendum on 16 March.

All 88 deputies in the Assembly broke into applause and stood for the Russian national anthem after approving the constitution.

The session was ignored by dissenters.

Speaker Vladimir Konstantinov hailed the move, saying "Step by step we have led Crimeans to realise their dream of returning home to Russia".

Crimea was transferred from Russia to Ukraine in 1954 by Soviet leader Nikita Khrushchev.

The legislation stipulates that Crimea will be fully integrated into Russia by 1 January, after a transition period.