A far north Queensland town is cleaning up after Tropical Cyclone Ita swept through overnight. The cyclone hit the coast Friday night as a category four storm, but has continued to weaken and is now a category two.

Cooktown, which is 250km north of Cairns, still has no power and the phonelines are down. The state government is assessing how fast power and phone lines can be reconnected. 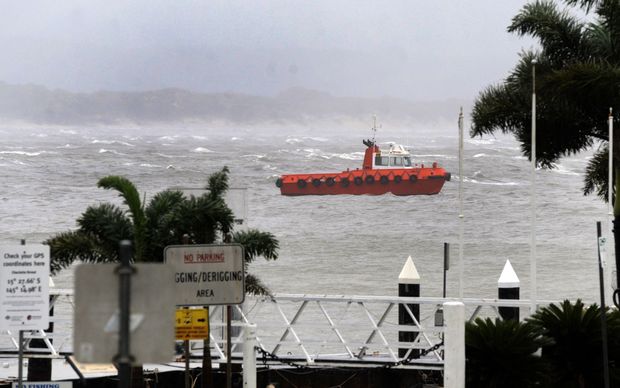 The Australian Bureau of Meteorology on Saturday downgraded Ita to a category two cyclone.

Ita crossed the coast near Cape Flattery, with winds near the centre up to 230km/h, about 10pm on Friday.

A New Zealander living in Cooktown says residents feel they've dodged a bullet. Kevin Stevenson says a few houses have lost their rooves but the damage could have been a lot worse.

He says people can't leave Cooktown as the two bridges leading out of it are closed due to flooding.

His wife Joanne says the noise of the cyclone was horrendous and she barely slept during the night.

Residents were warned that properties built before 1985 might not withstand the winds.

A roof at a pub in Cooktown was also lifted off. Trees were uprooted and fence posts and powerlines were strewn across roads.

"We've really got to this morning assess how swiftly we can get the power and telecommunications back on in these communities,'' he told ABC Radio.

"There will be people out there whose homes have been wrecked and a lot of people who are stressed, but I think in the main we've fared very well," he told AAP.

AAP reports more than 200 people spent Friday night in the cyclone shelter in Cooktown and about 800 people took refuge in the Hope Vale centre.