A court in Germany has released an art trove valued at $US1 billion kept by an elderly recluse in his flat in Munich. 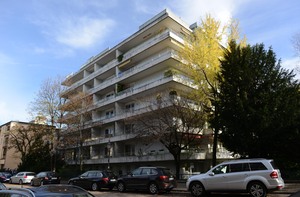 The building in Munich where art masterpieces were discovered in the flat of Cornelius Gurlitt. Photo: AFP (file)

The ruling on Monday followed an agreement by Cornelius Gurlitt, 81, to cooperate with art experts to determine if some of the 1280 art works were stolen or extorted from their original owners in the Nazi era.

"We have come across new evidence in the course of the investigation ... that leads us to re-evaluate the legal situation," said Augsburg state prosecutor Matthias Nickolai in a statement on Wednesday.

Prosecutors seized the works in February 2012 as part of a tax investigation.

Under a deal struck on Monday, Mr Gurlitt agreed to allow art experts to continue researching works whose provenance is in doubt. He may keep any works that have not been examined by them within one year.

Mr Gurlitt filed a formal complaint in February, challenging the search warrant and seizure order that prosecutors issued in 2011 on grounds of suspected tax evasion.