Russia has told the United States that Western sanctions over the Crimea dispute are unacceptable and is threatening "consequences".

Russian Foreign Minister Sergei Lavrov issued the warning in a telephone call to US Secretary of State John Kerry on Tuesday, just hours after Russian and Crimean leaders signed a treaty absorbing the peninsula into the Russian Federation. 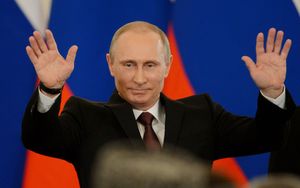 Crimean voters chose to secede from Ukraine in a disputed referendum last Sunday. A spokesman for Russian President Vladimir Putin told the BBC the treaty was already in effect. Although it must be approved by Russia's constitutional court and ratified by parliament, there is no doubt MPs will give their full backing when they vote on Friday.

The spokesman, Dmitry Peskov, said Russia has no intention of of becoming militarily involved in other areas of Ukraine - but it would act in other ways, if necessary, to protect Russians there.

President Putin has blasted the West as hypocritical in a fiercely patriotic address to a joint session of parliament in the Kremlin. To cheers, tears and standing ovations, he said Crimea's referendum shows the overwhelming will of the people to be reunited with Russia.

On Monday, the US and the European Union imposed sanctions on several officials from Russia and Ukraine accused of involvement in Moscow's actions in the Black Sea peninsula.

The US has now promised further measures. The toughest response to Mr Putin's speech came from Vice-President Joe Biden on a visit to Poland where he is trying to underscore America's commitment to that country and its Baltic neighbours, Radio New Zealand's correspondent in Washington reports.

"Russia has offered a variety of arguments to justify what is nothing more than a land grab," Mr Biden said.

At the White House, officials also condemned Russia's move, referring to it as the "attempted annexation of Crimea" and repeating that the US will not recognise any change in borders or sovereignty for the territory.

The crisis began last November after pro-Russia President Viktor Yanukovych ditched an EU deal in favour of stronger ties with Moscow. He fled Ukraine on 22 February after protests in which more than 80 people were killed, the BBC reports.

Pro-Russia armed men then took effective control of Crimea which has been part of Ukraine since 1954 but has a predominantly ethnic Russian population.