Reports in the US say some American investigators suspect that a missing Malaysia Airlines plane may have flown for another four hours after its last confirmed location. 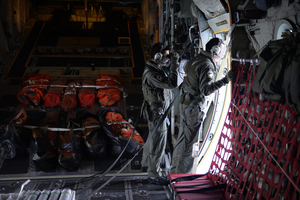 Searchers continue to scour the seas around the Malay Peninsula for the Boeing 777, which vanished an hour into a flight from Kuala Lumpur to Beijing on Saturday with 239 people on board, including two New Zealanders. No distress signal or message was sent.

The Wall Street Journal reports that data continued to be automatically downloaded from the plane's engines for four hours after tracking of its transponder stopped.

If verified, this raises the possibility that the jet could potentially have flown as far as the border of Pakistan or destinations in the Indian Ocean or Arabian Sea, Reuters reports.

It also raises the question of whether someone deliberately turned off the plane's transponder and diverted the flight.

The theory further complicates an already chaotic and unsuccessful search for the plane on both sides of the Malay Peninsula and off the Vietnam coast.

The Wall Street Journal reporter wrote that he had talked with two US investigators who said that the plane's Rolls Royce engines sent back data automatically indicating that they were still functional for another four hours and that the plane could have travelled a further 3500km.

A satellite image taken from space illustrating an object in a "suspected crash sea area" in the South China Sea on 9 March. Photo: AFP / CCRSDA via the State Administration of Science, Technology and Industry for National Defence, PRC

On the sixth day of the search on Thursday, planes were sweeping an area of sea where Chinese satellite images had shown what could be debris, but had so far found no sign of the airliner.

With 154 Chinese citizens on board the missing jet, China has redeployed at least 10 of its satellites to help with the search. The photographs of the three objects were taken on Sunday, but only published on Wednesday, the BBC reports.

The images place the objects 250km or so from the aircraft's last known position over the South China Sea and 380km from an oil rig on which New Zealander Mike McKay reported seeing a burning object in the sky on Saturday morning. They appear to show fragments in the South China Sea between Malaysia and Vietnam.

Mr McKay works on a rig off Vung Tau in south-eastern Vietnam and emailed authorities twice about what he saw on the day flight MH370 disappeared. China, Malaysia and Vietnam said on Thursday they have sent planes and ships to check the area where the objects were sighted.

Aerospace consultant Amartya De says Mr McKay's sighting was about the same time as the Chinese satellite images were taken and in the same area.

"This is the first possible sighting by a New Zealand oil rig worker. This needs to be further carefully investigated and it seems most likely that the pictures were taken at the same time and we should be able to find something very soon."

Mike McKay's first email, sent the morning after the plane went missing, gave a detailed account of seeing an aircraft in flames. His latest message is as follows:

"Gentlemen. I believe I saw the Malaysian Airlines flight come down. The timing is right. I tried to contact Malaysian and Vietnamese officials several days ago. But I do not know if the message has been received. I am on the oil rig Songa-Mercur. I observed the plane burning at high altitude at a compass bearing of 265 to 275 degrees from our surface location.

"While I observed (the plane) it appeared to be in one piece. From when I first saw the burning (plane?) until the flames went out (at high altitude) was 10-15 seconds. There was no lateral movement so it was either coming toward our position stationary (falling) or going away from our location. The general position of the observation was perpendicular/south-west of the normal flight path and at a lower altitude than the normal flight paths."

Malaysian authorities have revealed the plane's last communication at a news conference held in Beijing for relatives of the 154 Chinese among the missing passengers.

In reply to a radio message from Malaysian air control, flight MH370 radioed back: "All right, roger that".

As the plane reached the boundary between Malaysian and Vietnamese airspace, Malaysian air control announced it was handing over to Ho Chi Minh City control. Minutes later, all contact with the plane was lost.

Several leads pursued so far have proven not to be linked to the plane and the BBC's correspondent in Kuala Lumpur says that after days of fruitless searching an element of desperation is creeping into the search operation.

Meanwhile, a former Australian air accident investigator says planes that plunge into the ocean don't always leave trails of debris. Alan Stray says that if flight MH370 did end up in the sea, it might not have broken up as many are speculating. "There have been examples over the last seven or eight years of exactly that happening."

The search, which involves 42 ships and 39 aircraft from 12 different countries, has been widened to waters off both sides of the Malayan peninsula, but Malaysia's air force chief has denied reports that the plane was tracked by military radar to the Malacca Strait in the west.