Vietnamese authorities helping in the search for a missing Malaysia Airline's plane are searching for a burning object seen by a New Zealander off the coast of Vietnam. 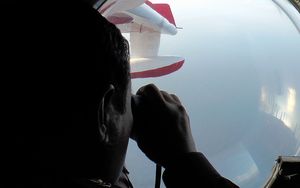 "We received an email from a New Zealander who works on one of the oil rigs off Vung Tau," he said.

"He said he spotted a burning [object] at that location, some 300km southeast of Vung Tau."

Flight MH370 went missing on Saturday with 239 people on board, including New Zealanders Ximin Wang, 50, and Paul Weeks, 38. Mr Wang, from Auckland, is described on the electoral roll as a student, while Mr Weeks had moved to Perth after the Christchurch earthquakes and was flying to Mongolia to start a job as a mining contractor.

About two-thirds of the 227 passengers and 12 crew now presumed to have died were Chinese, while other nationalities included 38 Malaysians, seven Indonesians, six Australians, five Indians, four French and three Americans.

Authorities have been searching for the plane, which disappeared en route from Kuala Lumpur to Beijing, for the past five days.

Search teams are scouring waters off both sides of the Malaysian peninsula, amid confusion over the plane's last known location, the BBC reports.

Earlier this week, Malaysia widened the search for the missing plane amid conflicting reports on its last known position.

The Malaysian authorities initially said flight MH370 disappeared about an hour after it took off from Kuala Lumpur International Airport, as it flew over the South China Sea, south of Vietnam's Ca Mau peninsula. No distress signal or message was sent.

Early search efforts focussed on waters between Malaysia and Vietnam.

The search was later extended to the Malacca Strait and the Andaman Sea, off Malaysia's west coast, amid reports that the plane could have turned back.

On Wednesday, Malaysia's air force chief Rodzali Daud denied remarks attributed to him in local media that a missing Malaysia Airlines plane was tracked by military radar to the Malacca Strait, far west of its planned route.

Gen Rodzali Daud said he "did not make any such statements" but the air force had "not ruled out the possibility of an air turnback", the BBC reported.

"We are not going to leave any chance. We have to look at every possibility," Malaysian civil aviation chief Azharuddin Abdul Rahman told AFP news agency, without indicating why the search was expanded north.

Officials still do not know what went wrong with the aircraft, and several leads pursued so far have proven not to be linked to the plane.

At least 40 ships and 34 aircraft from several different countries are taking part in the search for the plane.