The United States says President Barack Obama has reiterated his strong support for the protection of human rights in Tibet, during a meeting with exiled Tibetan spiritual leader, the Dalai Lama, at the White House. 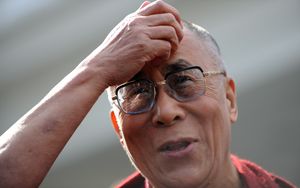 The Dalai Lama speaking to media after his White House meeting. Photo: AFP

China had urged the US to cancel the meeting, saying it would "seriously impair China-US relations".

Beijing described the Dalai Lama as a separatist while the spiritual leader said he only advocated greater autonomy for Tibet, not independence.

During their meeting in the White House Map Room, Mr Obama and the Dalai Lama reportedly said they hoped talks would resume between Beijing and the Tibetan spiritual leader's representatives, the BBC says.

The two men last met in 2011, in talks that angered China then too. Tibet is governed as an autonomous region in China.

China has been widely accused of repressing political and religious freedoms in Tibet. Beijing rejects this and says economic development has improved Tibetans' lives.