The head of the United Nations' refugee agency says he has witnessed a humanitarian catastrophe of unspeakable proportions during his visit to the Central African Republic.

Antonio Guterres said on Wednesday that massive ethno-religious cleansing is continuing and he has seen shocking barbarity, brutality and inhumanity, AFP reports. 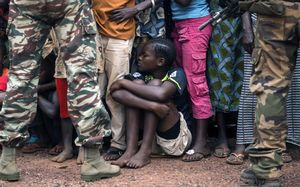 The humanitarian situation has deteriorated since a coup in March last year led by Muslim Seleka rebels. Photo: AFP

The UN High Commissioner for Refugees also says the country's new government is incapable of effectively protecting its citizens.

At the same time, the CAR's new transitional president Catherine Samba Panza vowed war against a mostly Christian anti-balaka militia whose recent attacks have led to a mass exodus of Muslims.

The anti-balaka emerged last year after a mostly Muslim rebel group seized control of the country.

They have gone on the rampage in Bangui and elsewhere, largely targeting Muslims, since the rebels were ousted from power in January.

A huge airlift launched on Wednesday by the UN's World Food Programme is unlikely to make a dent in the humanitarian crisis.

The first cargo aircraft, loaded with 80 tonnes of rice, landed in Bangui in the early afternoon. There will 24 daily supply drops to the city.

"This is a rather exceptional operation, our biggest emergency air operation in a long time, bigger than for Syria and the Philippines," WFP spokesman Alexis Masciarelli told AFP.

However, he admitted the operation "would not completely solve the problem" in CAR, where 1.3 million people - more than a quarter of the country's population - is in need of food assistance.