Dozens of bushfires have burnt large swathes of the Australian state of Victoria, destroying homes and farms, in the worst fire conditions since Black Saturday five years ago.

Fire Services Commissioner Craig Lapsley says up to 10 homes have been lost in Warrandyte, Mickleham/Craigieburn and Gisborne but there have been no significant injuries or deaths. 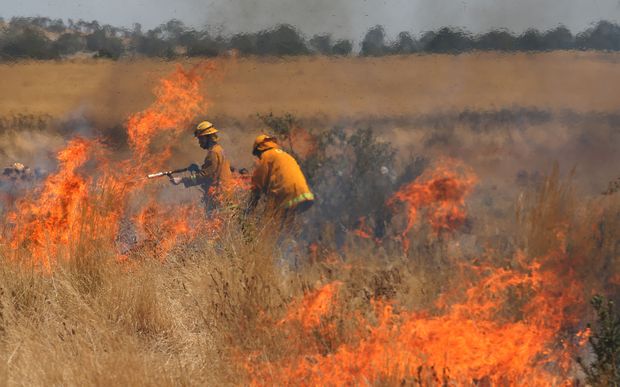 A grass fire close to homes in the Melbourne suburb of Craigieburn. Photo: AAP / DAVID CROSLING

Fire has moved to the edge of the western urban area of Morwell, into plantation areas and is impacting on two open cut coalmines.

Some homes about half a kilometre out of Morwell have been lost, incident controller Laurie Jeremiah said.

Latrobe City Council chief executive John Mitchell said the fire on the northern edge of the Hazelwood mine had not reached the coal seams.

"The fire has not got into the coal seams, which would represent a major problem because the Hazelwood Power Station is a 1600-megawatt power station and obviously represents a critical piece of infrastructure in terms of power generation in our state."

At the Yallourn Power Station the fire is burning in grassy areas near the open cut mine.

Morwell, about 150 kilometres from Melbourne, has a population of about 14,000.

Fire Services Commissioner Craig Lapsley it was the most serious fire day for Victoria in five years. Throughout the day, 143 warnings were issued to communities across the state.

By Sunday evening, emergency warnings that had been in place for Gisborne and Warrandyte on the fringe of Melbourne had been downgraded to watch and act notices. But a warning remained in place for Mickleham, where residents were being told to seek shelter indoors as it was too late to leave.

The state is under a total fire ban for the entire weekend and a heat health warning, as temperatures reached 40 degrees Celsius in some regions.

The Black Saturday bushfires claimed the lives of 173 people in February 2009.

A contingent of 41 New Zealand firefighters are in Victoria to help local crews.

Rural Fire Authority liaison officer Russel Barclay, who is in Melbourne, said they might not get to face the fires for two days because of the extreme fire danger. He said the fires have escalated and it appears some of the smaller fires have joined to make larger ones.

In South Australia, firefighters spent Saturday tackling fires in a national park in the Adelaide Hills and in the Southern Flinders Ranges.