The Foreign Affairs Minister says he's deeply concerned about reports of a collision between a protest vessel and a Japanese whaling vessel in the Southern Ocean. 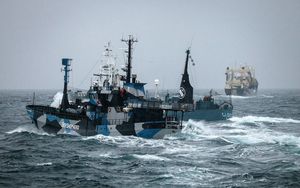 The Bob Barker's captain Peter Hammarstedt says the attack began at midnight when the Japanese vessels began dragging steel cables across their bows, and one smashed into the bow of the Bob Barker.

"Three of the harpoon ships started attacking the Sea Shepherd vessels, they started trailing about 300 metres of steel cable across our bows in an attempt to damage our propellers."

Captain Hammarstedt says the ship has substantial damage to its front section, but it's above the waterline, so it can keep operating.

Foreign Affairs Minister Murray McCully says the Government strongly opposes Japanese whaling in the Southern Ocean, as well as any activities that put lives or vessels at risk. He says both parties should show restraint and respect for human life.

The ABC reports Australia's Federal Government says it is seeking more details about the reported collision.

A spokesman for Environment Minister Greg Hunt says his department is preparing an urgent briefing on the claim. The Government is urging both parties in the whaling dispute to make safety a priority.

Japan's Institute of Cetacean Research says the claims that the two anti-whaling vessels have been attacked by Japanese whaling ships are probably false.

Institute of Cetacean Research spokesperson Glenn Inwood says Sea Shepherd has a history of making up stories and he very much doubts the veracity of the Sea Shepherd claims.

Mr Inwood says he hasn't heard from either of the Japanese ships yet.