More than 50 members of the Israeli parliament toured the prisoner blocks at Auschwitz on Monday to commemorate the 69th anniversary of the liberation of the Nazi death camp.

The delegation was the biggest ever from the Knesset to visit the camp in southern Poland where the some 1.5 million people were killed between 1940 - 1945, most of them Jews. 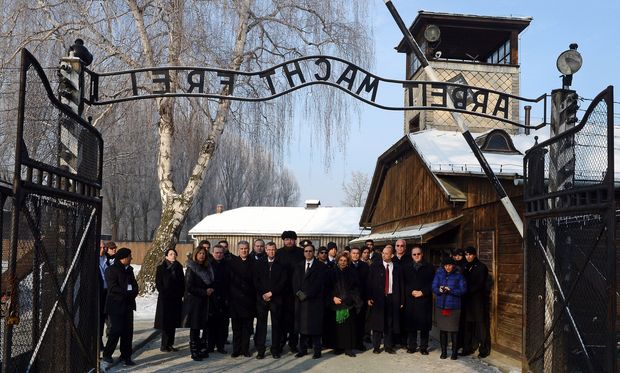 Members of the Knesset enter the main gate at the Auschwitz concententration camp in Poland on Holocaust Day. Photo: AFP

The Knesset members were joined by Holocaust survivors, Israeli government ministers, Polish officials and representatives from dozens of other countries to mark the date, which is also International Holocaust Remembrance Day.

"Today, 69 years after we left this hell called Auschwitz, we are here again as proud people, as proud citizens of the new Jewish state that rose out of the ruins of European Jewry," Auschwitz survivor Noah Klieger, 87, told a memorial ceremony.

Labour Party leader Isaac Herzog said Jews must work to create for future generations "a different world, a hopeful future, a world without fear where a Jew will be safe in any and every place.

"If we lose the hope to build a new world, then we give in to Auschwitz," he said.

Earlier, the delegates walked beneath a metal sign with the German words "Arbeit Macht Frei," or "Work Makes You Free" -- the same sight that greeted inmates arriving at the camp. All but a few survivors died in the gas chambers, in medical experiments, or from disease and malnutrition.

The tour of the site included a stop at the prisoner blocks where piles of human hair and children's clothes are preserved as evidence of the mass killings.

The visitors later marched to the nearby site of the Birkenau concentration camp for the memorial ceremony. They were scheduled afterwards to recite prayers and light candles for the dead.

Later on Monday, the Knesset delegation was due to visit the city of Krakow, to join Polish parliamentarians in a joint session dedicated to remembering the Holocaust.