A leading British think-tank says obesity in developing countries is growing at an alarming rate and much faster than in rich countries. 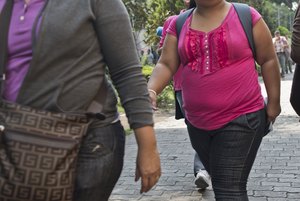 The Overseas Development Institute says nearly 1 billion people in developing countries were overweight or obese in 2008, more than tripling the number seen in 1980.

Globally, one in three adults is now considered overweight or obese. In 1980, it was one in five, the BBC reports.

The Future Diets report analysed existing data and found the steepest rise has been in developing nations including Mexico and Egypt, where people are spending their increasing disposable incomes on fatty, sugary foods.

The report suggests following the example of some American states in taxing things like fizzy drinks and sugary sweets. It also warns if current global trends continue, there will be a huge increase in heart attacks, strokes and diabetes.

Lead author Steve Wiggins said some of the worst-affected countries could do well by looking elsewhere for lessons.

"So when you see those variations in diet and the outcome on obesity, you'd have to say there are lessons from those countries which have much lower incidence for countries that have higher incidence."

A total of 904 million people in developing countries are now classed as overweight or above, with a body mass index of more than 25, up from 250 million in 1980.

This compares to 557 million in high-income countries. Over the same period, the global population nearly doubled.