A search and rescue operation to find three men missing on a plane in Antarctica has been suspended.

Three Canadians were on board a Twin Otter that failed to make it through the Queen Alexandra mountain range on a trip from the South Pole to the Italian base Terra Nova Bay in the Ross Sea.

An emergency locator beacon began transmitting at 10pm on Wednesday (NZ time) from the northern end of the range. A US Hercules flew to the area that night, but failed to find the plane.

A DC 3 and C-130 Hercules circled the spot for most of Thursday where the beacon indicates the plane went down.

The New Zealand Rescue Coordination Centre is leading the search. Mission coordinator John Ashby said the DC3 crew returned to the US base at McMurdo Sound about 5pm to rest.

Bad weather and high winds gusting more than 170km/h prevented crews from seeing through a thick cloud base. However, Mr Ashby said the locator beacon is still sending out a signal.

The Twin Otter's pilot is Bob Heath, one of Canada's most experienced polar aviators. Mr Ashby said the weather has been frustrating for searchers, but the Canadians are very prepared for just such an emergency.

"These are experienced people on board the aircraft and we do know that they carry a three-person survival bag with supplies for at least five days plus mountain tents, so they are well prepared.

"There would normally be radio contact with the plane, but in this case we don't know what's actually happened. The plane may well have just set down because they've got no communications and perhaps the distress beacon is the only way of alerting us to their location."

The National Science Foundation said the Twin Otter was flying in support of the Italian Antarctic Programme. It is owned and operated by Kenn Borek Air from Calgary, a company that charters aircraft to the Antarctic programme.

The air search will resume early on Friday morning and favourable weather is expected. 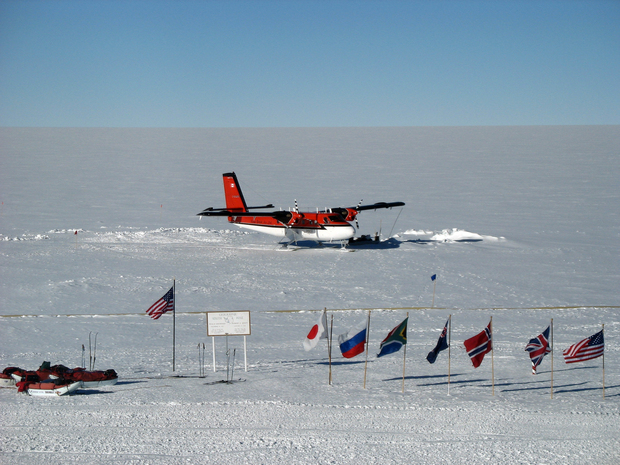