In Hungary, a former policeman has been charged with war crimes during World War II for his role in the deportation of Jews to the Auschwitz Birkenau Nazi death camp in 1944. 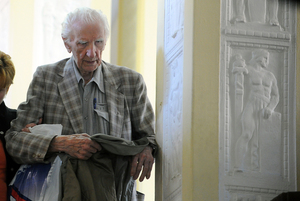 Laszlo Csatary, 97, was taken in for questioning in Budapest on Wednesday.

He has denied the accusations against him and told prosecutors that he was just carrying out orders.

The BBC reports he is now under house arrest for 30 days and his passport has been confiscated.

Earlier this week, reporters from the Sun newspaper found the former art dealer living in Budapest.

He is number one on the Simon Wiesenthal Center's wanted list and is accused of involvement in the deportation of 15,700 Jews from Kosice to the Auschwitz death camp.

Earlier, he was also involved in the deportation of about 300 Jews from Kosice to Kamenetz-Podolsk in Ukraine, where almost all were murdered, in the summer of 1941.

In 1948, a Czechoslovakian court condemned Mr Csatary to death in absentia.

After the war, Mr Csatary escaped to Canada where he worked as an art dealer in Montreal and Toronto. He disappeared in 1997 after he was stripped of his Canadian citizenship.