The "extinction pit" is a term used by scientists and a place no animal wants to go. 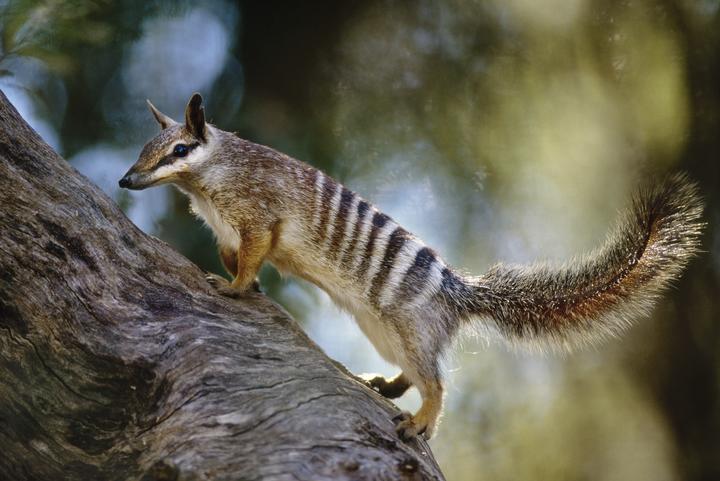 It means a species has become so rare that even if a small population remains, it will soon disappear.

Just five years ago, the numbat - Western Australia's animal emblem - found itself on the edge of that pit.

In just a couple of years, the small marsiupial's population had crashed.

Scientists considered a number of different scenarios, including disease.

But motion sensor cameras set up at Dryandra, 160 kilometres south-east of Perth and one of only two locations where numbats have managed to survive, showed the striped marsupial was facing a different kind of attack - feral cats.

Three decades after getting feral foxes under control in the area through baiting, feral cats had moved in to take their place, and the effect was devastating.

"It was a terrible feeling to see these animals disappearing in front of your eyes," Department of Biodiversity, Conservation and Attractions (DBCA) conservation coordinator Peter Lacey said.

"Particularly because we had managed to maintain them for so long in such a difficult situation." 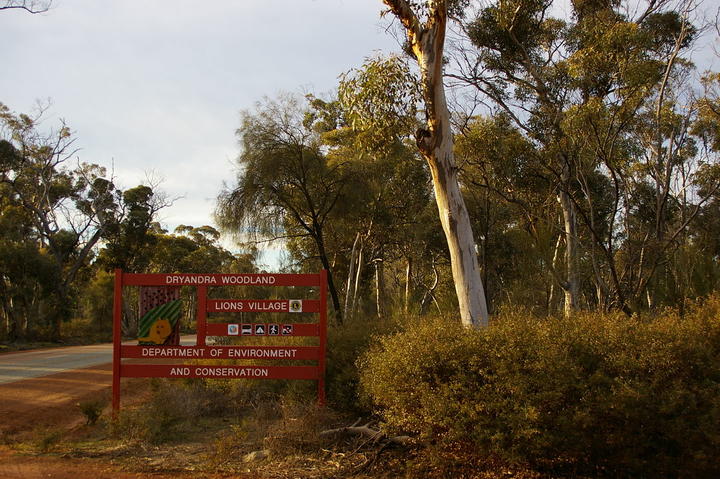 The entrance to the Dryandra Woodland in Western Australia. Photo: Gnangarra, Creative Commons.

By 2014, there were estimated to be just 50 numbats left at the 28,000 hectare Dryandra woodland, with their total population in the wild less than 1,000 throughout the whole country.

It was not until motion sensor cameras were installed around the perimeter of Dryandra that scientists really understood what was happening to the endangered animal.

"We knew there were cats out here, but to find out there were hundreds of cats through Dryandra, and knowing how effective they were as predators [was surprising]," Mr Lacey said.

"When you only have got 50-odd numbats and a couple of hundred woylies, the impact they can have on those animals is huge."

The small kangaroo-like woylie, which is also now only found in Dryandra and two other locations, was also being wiped out, with the population falling from 14,000 to just a few hundred.

It was once spread throughout most of Australia.

"We had actually delisted them from the threatened species list and as soon as we did that, the numbers just crashed," Mr Lacey said.

Feral cats can eat a dozen native animals every night. 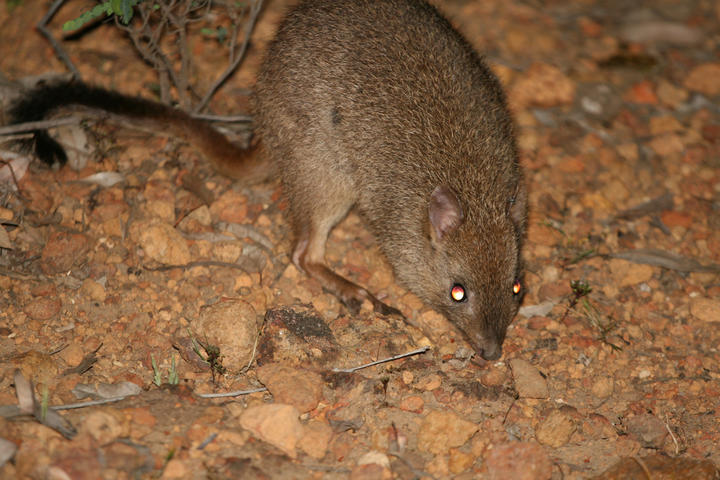 Woylies are now extinct in the wild through much of Australia. Photo: Arthur Champman.

"They could easily take a numbat or a woylie [each] per night, so you don't need a lot of feral animals to start making an impact," he said.

"The thing that really changed the game was the decision that we couldn't wait any longer. We couldn't just continue researching … we had to throw everything at it."

A feral cat bait called Eradicat was already being trialled in Dryandra and was widely rolled out.

Like fox bait, it contains 1080, a poison to which native animals are naturally resistant, that is encased in food that will tempt a fussy cat.

A 1,000-hectare predator-proof fence was also built to ensure an "insurance population" of both numbats and woylies.

But while the cats were now being targeted within the woodland, the cameras had identified another problem.

Most of the feral cats were not residing in the woodland, but were instead living and breeding on the surrounding farms and coming into the woodland to dine on the native animals.

"The problem with Dryandra is it is in a large area of farmland," Mr Lacey said.

"So you can control the animals on the reserve to a certain level, but if you are not controlling them off the reserve they come back in." 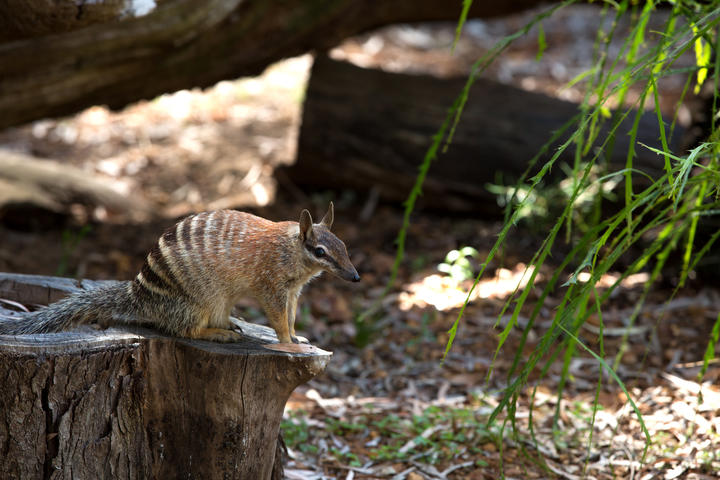 Numbats are a small striped marsupial native to Australia that spends most of the day hunting termites to eat. Photo: 123rf

Cameron Christensen and his son Daniel both live on properties near Dryandra.

They were among 50 property owners around Dryandra who decided to trap cats as part of the Farmers for Fauna project, a joint venture between Australia's Department of Biodiversity, Conservation and Attractions, and the Peel Harvey Catchment Council.

The project provides free traps and training for landowners to control feral cats and foxes.

The Christensens have also purchased 30 of their own feral cat traps, which they set three times a week around haystacks and farming sheds in the area.

"We are probably up around 600 to 700 cats taken already," Daniel Christensen said.

"But when you are out seeing 10, 15, 20 cats around a shed a night, it's a lot, when you think about how many sheds are around, how many hay stacks are around."

Some of the feral cats they have caught weigh almost eight kilograms.

"They are big animals and they are targeting big native animals to survive," Mr Christensen said. 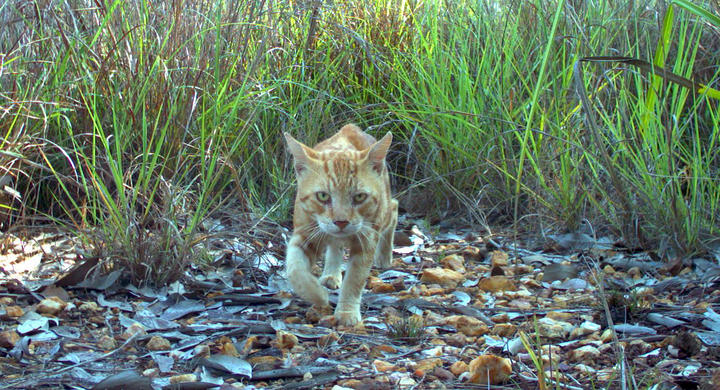 "So since we have got rid of them it is definitely making a difference."

Mr Christensen has also erected cameras on his property and said while he was yet to see a numbat, he was now seeing native animals he had never seen before.

"Just the reduction of cats and foxes in our area has bought in the chudditches, the red-tailed phascogales, possum numbers are very high," he said.

"It's just good to see those things turning up on the cameras and proving that they are there, it does make a big difference."

A population 'explosion' of the good sort

It is estimated the number of numbats in Dryandra has now increased to about 400.

They are also being supplemented by a breeding program at Perth Zoo, with numbats released back into Dryandra fitted with radio collars to help scientists monitor their survival.

"You could call it a population explosion, which is a really good thing," Mr Lacey said.

"Normally you hear about population explosions in a bad way, but for us it is something we are really happy about. Really proud of.

"Now we only get the occasional cat that comes in, and most of those are detected around the outside edge of the reserve."

Woylies, which breed year-round, are also booming, with about 8,000 of the animals now believed to be living in the woodland.

"I think we owe it to future generations to be able to see all those animals," Mr Lacey said.