The Te Taitokerau leader Hekenukumai Busby is now Sir Hek - with thousands of his people celebrating his investiture in Waitangi today. 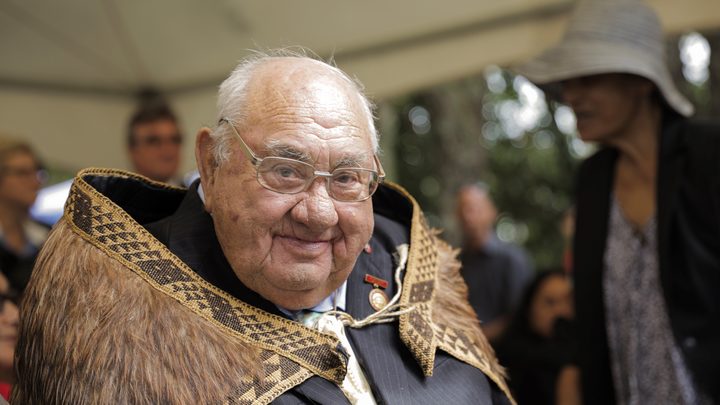 Prime Minister Jacinda Ardern was by his side as the master carver and celestial navigator was honoured for his life's work.

The haukāinga at te whare rūnanga in the Waitangi Treaty grounds roared into life as Hek Busby became Sir Hek.

The day before his investiture, Sir Hek said he wasn't too fussed about his impending title change.

"I been use to challenges all my life and I'm just preparing for it - I know it's gotta be done whether I like it or not."

Sir Hek grew up as a farming kid in the tiny community of Pukepoto - a few kilometres outside of Kaitaia.

"Our parents didn't have much money but we never starved - they were beautiful."

When the Hawaaian waka Hokule'a landed in New Zealand in 1985, the late Ngāpuhi leader Sir James Henare was so impressed he wanted to repeat the journey from New Zealand.

"He hoped in the near future we would be a waka like yours and go back to where you started this voyage of rediscovery," Sir Hek said.

And Sir Hek took up his challenge - building and then launching the waka Aurere on its journey to Rarotonga in 1992.

His late wife, Hilda Busby was by Hek's side throughout his journey.

She died after he brought his waka Te Aurere back from Hawaii - and continued his sea voyaging in her honour.

"I decided to build another canoe and name it after her."

Joe Conrad, from Te Aupōuri, is the captain of Ngātokimatawhaorua, the world's largest waka taua which is housed at Waitangi.

He said ever since the Hawaiian visit in 1985 Hek has single mindedly taken up the challenge of reviving the lost art of Polynesian sea-voyage.

"Through Hector's determinedness and doggedness to gain back that knowledge - not only the knowledge of celestial sailing, ancestral navigation it was also the knowledge how to build and engineer these sea-faring vessels of these waka hourua.

And his skills as a master carver, Mr Conrad said, were unrivalled.

"There's always a story that Hector will pick the most ugliest log and he'll make the greatest canoe or waka out of it."

The investiture was one of a number of pōwhiri held to honour Hek today - the governor general Dame Patsy Reddy read out his long list of achievements.

Prime Minister Jacinda Ardern was by Sir Hek's side throughout the ceremony and held his tokotoko or walking stick.

And as she knighted him - his crew of kaihoe, many students he's taught over the years, showed their pride in his achievement.