A court in Bangladesh has remanded seven men in custody, including a local leader of the governing Awami League party, over a suspected gang rape. 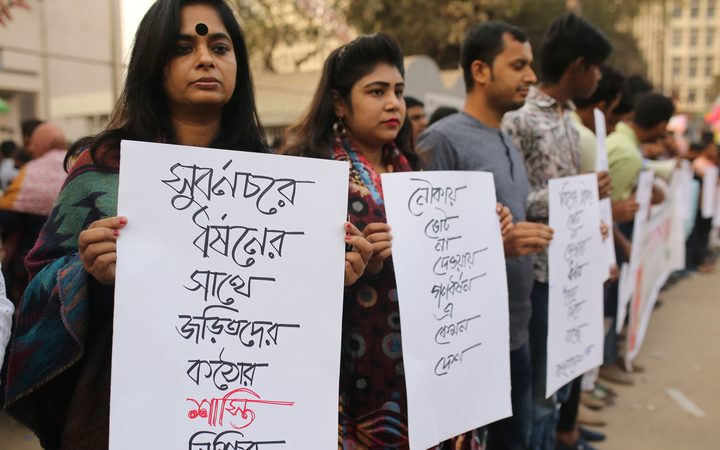 Bangladeshi students and social activists form a human chain in protest of the gang-rape of a mother from Noakhli. Photo: AFP

A mother of four alleges she was raped by a group of men because she voted for the opposition Bangladesh Nationalist Party in last week's poll.

The election night attack has triggered protests and anger on social media.

The men have denied the accusations, and the Awami League leader has been expelled from the party.

The Awami League won a landslide victory in last Sunday's election, which was marred by violence, intimidation and vote rigging claims. At least 17 people died in clashes between the ruling party and opposition supporters.

On Friday, the UN expressed concern over what it described as reprisals against the political opposition by ruling party activists after the elections.

The woman's husband lodged a complaint last week saying that a group of men forced their way into the family home in Noakhali district, tied him and their four children up, and sexually assaulted her in the middle of the night.

Neighbours helped the family after the attackers left, and the woman, 35, was taken to hospital.

According to reports, she was allegedly warned by the men earlier that day, while at a polling centre, not to vote for the opposition candidate.

She told local media she particularly angered Ruhul Amin, the Awami League's former local leader, and he later sent his accomplices to attack her. 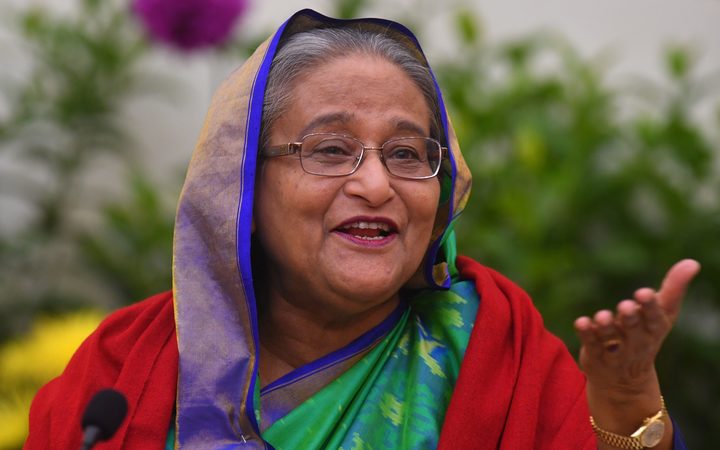 Opposition groups have held protests in the capital Dhaka and in Noakhali since news of the gang rape broke. They are now calling on the ruling party to apologise on behalf of its men.

"Countless leaders and activists were injured in attacks before and after the poll, and even a mother of four children was not spared the brutality of gang-raping," Mirza Fakhrul Islam Alamgir from the Bangladesh Nationalist Party told journalists after meeting the woman on Saturday.

Local Awami League leaders had denied the allegations against them and their supporters, but decided on Friday to expel Mr Amin after his arrest.

Why was this election important?

Prime Minister Sheikh Hasina secured her third consecutive term in the December election, with her party and its allies winning almost all of the 300 parliamentary seats contested.

The opposition alliance, which won just seven seats, condemned the disputed vote as "farcical" and demanded a fresh vote.

There were claims of vote-rigging, and a BBC correspondent saw filled ballot boxes at a polling centre before polls opened.

The lead-up to the election saw violence between rival supporters and a crackdown on dissent by a government that critics say has only grown more authoritarian during its 10 years in power.