The idea of a concrete wall on the US-Mexico border was dropped early on Donald Trump's presidency, his outgoing chief of staff John Kelly says. 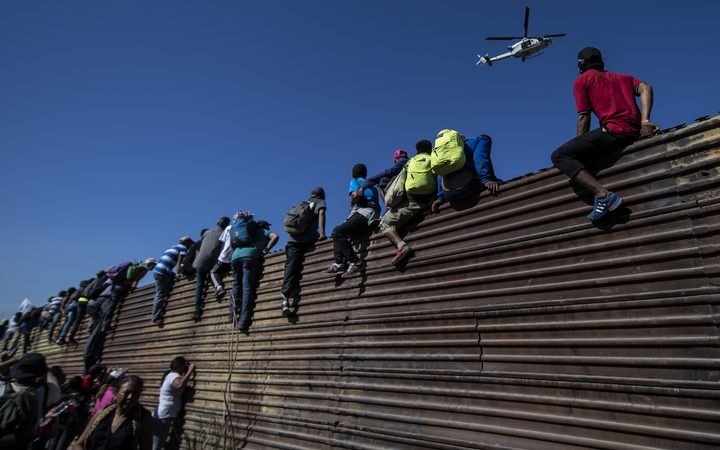 A group of Central American migrants climb a metal barrier on the Mexico-US border. Photo: AFP

Mr Trump made the idea of a solid wall on the border a key pledge from the start of his presidential campaign in 2015.

But by saying the idea of a concrete wall was dismissed long ago, Mr Kelly appeared to contradict the president.

Mr Kelly will leave the White House on Wednesday after 17 months.

Before leaving, he gave a rare interview to the LA Times, published on Sunday, in which he called the role a "bone-crushing hard job".

"To be honest, it's not a wall," Mr Kelly said, when asked about plans for the border.

As soon as he did so, he told the LA Times, he sought advice from those who "actually secure the border".

"They said, 'Well, we need a physical barrier in certain places, we need technology across the board, and we need more people,'" he said.

"The president still says 'wall' - oftentimes frankly he'll say 'barrier' or 'fencing,' now he's tended toward steel slats. But we left a solid concrete wall early on in the administration, when we asked people what they needed and where they needed it."

"I would build a great wall, and nobody builds walls better than me, believe me, and I'll build them very inexpensively, I will build a great, great wall on our southern border. And I will have Mexico pay for that wall."

These were the words Mr Trump spoke on 16 June 2015 as he launched his presidential campaign. At the same time, he called Mexican "rapists" and drug dealers were entering the US.

In the early months of his campaign, he attacked rival Jeb Bush for calling his proposal a "fence".

In January, Mr Trump said the idea had not changed since its conception and that it was still very much a wall, with one caveat.

His tone has changed since then, although only in the past year.

When visiting prototypes for the wall in March (that included large concrete options) he said "you have to have see-through... you have to know what's on the other side of the wall".

Then in September, he said it was a mix of fencing and walls.

Mr Trump has since acknowledged it will not be a concrete wall, but rather "artistically designed steel slats", though he continues to refer to it as a wall and not a fence.

It should be pointed out too that Mr Kelly himself had said early in the Trump presidency that it would be a wall, and not a fence.

"There will be the physical wall and then parts of the wall that you can actually see through because it will rely on sensors and other technology," he told Fox News in February 2017.

What's the latest with the wall?

Mr Trump is struggling to get the funding needed to start building the wall.

Because Congress was not able to agree a funding deal that included the financing of the wall, the US government went into a partial shutdown before Christmas that has still not been resolved.

Mr Trump has since threatened to shut down the border with Mexico if funding for the wall is not approved.

But with Democrats taking control of the House of Representatives on Thursday, the chances of a deal being struck are likely to become even more distant.

The difficulty in getting approval for the wall has created disapproval among some Trump loyalists.

Right-wing columnist Ann Coulter - author of In Trump We Trust - recently predicted he will not be re-elected.

"Without a wall, he will only be remembered as a small cartoon figure who briefly inflamed and amused the rabble," she wrote.