Since Edmund Hillary first conquered the summit of Mount Everest 65 years ago, many have followed in his footsteps - or at least tried - but all of them have left something of themselves behind: their poo. 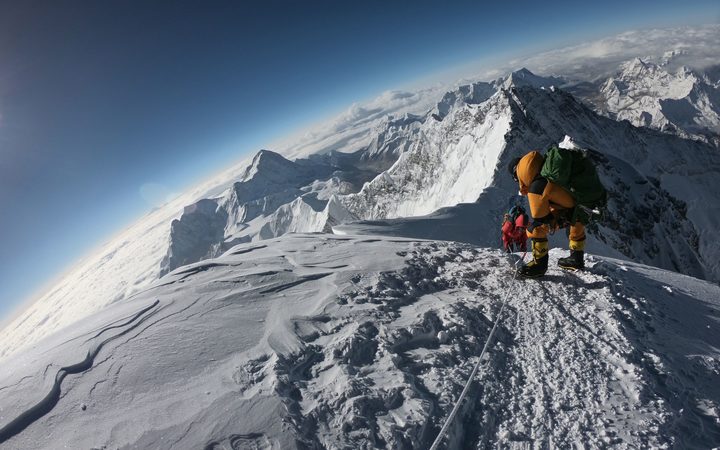 In this file photo mountaineers make their way to the summit of Mount Everest, as they ascend on the south face from Nepal. Photo: AFP or licensors

Retired United States engineer Garry Porter, who came within 400 feet of the summit himself in 2003, was horrified to learn of the mountain of human waste deposited on Everest each year, which is dumped in a frozen lake bed at the end of the season by sherpas.

"This mountain is sacred to the Nepalese people, it's an honour to be there, we are their guests in their country," he said.

"Yet we walk away leaving our human waste like it doesn't exist - and it does.

"It adds up to 12 to 14 tonnes of solid human waste annually. And that's only getting bigger as the mountain gets more popular. It's an environmental disaster."

His invention - a biogas digester - uses anaerobic bacteria to break down sewage into fertiliser and methane, which can be used by locals to cook food and light their homes.

In order to keep the microbes alive in the chilly conditions over 20,000 feet above sea-level, Mr Porter came up with the idea of wrapping the digester in insulation and burying it underground, "like a giant thermos flask".

Solar panels power batteries to keep the digester warm through the night.

"Whatever we do has to be low-tech, low-cost and available in Nepal," he said.

"It's not rocket science, it's all off-the-shelf hardware that can easily be replaced.

"We've got permission from the Nepalese government to build in the national park, we've tested the design at Kathmandu University, we've got Nepali contractors lined up to build it - we just need the money to do it."

Volunteers will oversee the construction, train Nepalese operators to run it and then turn the key over to them, Mr Porter said.