Couples earning up to $180,000 will be able to buy KiwiBuild homes, the government has announced.

Housing Minister Phil Twyford has set out the maximum income cap restricting who will be allowed to buy a home under the programme.

To be eligible, buyers must be purchasing their first home, or be "second chancers" - those people who haven't yet had an opportunity to own their own home or former homeowners who've ended up in a similar financial position as a first home buyer, for example a divorced couple.

They must be New Zealand citizens, permanent residents or those who ordinarily reside in New Zealand, and intend to own and live in the house for at least three years. 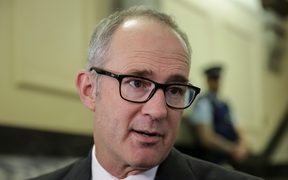 Does this affect you? Send us an email: iwitness@radionz.co.nz

Mr Twyford said people earning that level of income had been struggling to buy in high demand areas like Auckland and Queenstown, whereas 10 years ago they would have been able to afford to.

He said people in jobs such as teaching, nursing and the police, whose salaries wouldn't get them into the housing market, might be able to afford a KiwiBuild home.

Cabinet signed off on the eligibility criteria yesterday.

The KiwiBuild policy aims to construct 100,000 affordable homes over the next 10 years. The government's beginning with a target of 1000 houses over the next year and another 9000 by 2021.

From today, aspiring first home-owners will be able to register their interest online.

There will be a ballot system for prospective buyers with those whose names are drawn getting the first opportunity to buy the homes they have registered interest in.