Tired of Trumpism and Emailgate? Here's how to avoid the circus that is the US Presidential election. 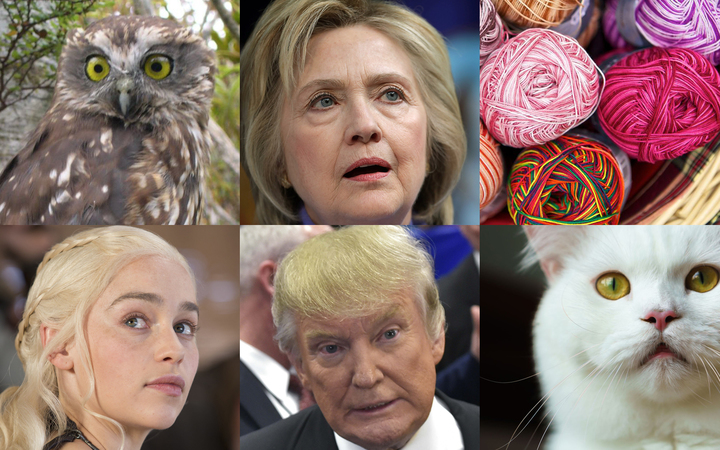 How to avoid the ongoing battle for the White House between Hillary Clinton, top middle, and Donald Trump, bottom middle? From top left clockwise, vote in a bird election, take up knitting, check out the web's plethora of cat videos or binge watch Game of Thrones. Photo: AFP / 123RF

It already feels like the longest campaign in the history of modern elections, and there are still 18 days to go.

So, for everyone who is not interested in the US election - or is burned out - here are our suggestions for how to avoid the news for the next couple of weeks.

1. Mute is your friend

Need to clean up your social media feeds? Got that one relative who insists on sharing something every time Hillary Clinton opens her mouth, but can't unfriend them because they make the annual Christmas cake?

Unfollow them. They won't know, and you'll still get that sweet brandy-soaked goodness.

Similarly on Twitter, muting will come in handy. On some apps, you can mute not just people, but words. So, hiding: 'Trump', 'Clinton', 'Vote', 'Election', 'America' or 'the entire universe', might clear out some references to the election.

You may end up spending more time muting than actually tweeting, but that's probably still a net win.

I had to mute a frog emoji. This election sucks. pic.twitter.com/AKPvgBWVUc

We'll leave it to you to decide which candidate is puppies and which is kittens.

Now might be a great time to learn that language you've always wanted to learn, or go for long, solitary walks catching up on your favourite podcast. Maybe, as it's spring, take up gardening. Knitting is good for your brain and heart, and you will have a blanket to hide under when you're done.

Or, you could read the 20 books people are most likely to have lied about reading, and put those tall tales behind you.

Forest and Bird is running its annual Bird of the Year competition, if you still want to get your vote on. If you prefer to decide based on the birds' particular oratorical style, we have you covered.

Unfortunately, even this election has been marred by accusations of vote rigging.

The extended versions of the three Lord of the Rings movies (with credits), clock in at just under 12 hours. The three Hobbit movies add another nine hours. That will get you through a few days. (And there are certain parallels with those grim and lengthy battles, as US comedian Samantha Bee points out.

Incredibly handy website Binge Clock clocks Gilmore Girls at six days and nine hours, Game of Thrones at two days and 11 hours and the Hunger Games franchise at nine hours and eight minutes. And should you need some Aaron Sorkin tinted glasses, The West Wing will take you about six-and-a-half days.

Add The Simpsons, at a whopping 12 days and 12 hours, that should get you past the post-vote analysis.

If the election were a Sex and the City episode. https://t.co/AzWaLHqMaC pic.twitter.com/3xApmVBADa

In a speech last week, Mrs Clinton said sometimes this election - and Mr Trump specifically - "makes you want to turn off the news. It makes you want to unplug the Internet or just look at cat GIFs. Believe me, I get it. In the last few weeks I've watched a lot of cats do a lot of weird and interesting things."

But why limit yourself to cats? The internet is a wild and wonderful place where you can find gifs of puppies, kiwis, capybaras and indeed all baby animals.

The New Zealand Speleological Society lists a good number of caves in New Zealand, and it seems safe to assume at least some of those would be without internet access.

According to Te Ara, about 550 caves have been mapped around the country, mostly limestone, though there are also sea caves and lava caves.

If terrifying spiders don't bother you, you could even try to make friends with the brilliantly named Spelungula cavernicola, which are only found in caves the Nelson and Buller regions.

If a cave sounds too damp and potentially full of creepy-crawlies, Vice has a handy guide to building your own emergency bunker (Warning, explicit language). Who knows, it may come in handy on 10 November.