They're thought of as the scourge of the internet, but Aimie Cronin finds trolls aren't always dangerous and, in fact, can sometimes be helpful. 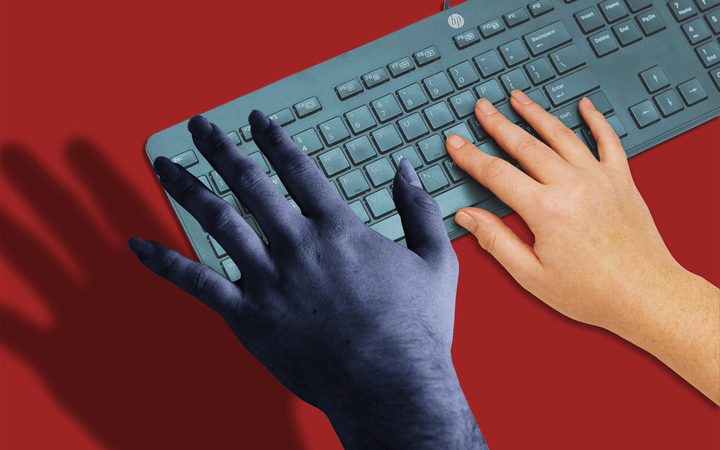 In June 2015, David Farrier wrote an opinion piece called ‘It’s time we admitted Waiheke is terrible’. The headline gave a very apt summation of the subject matter and it would be fair to say the journalist and filmmaker got a reaction; probably the one he was looking for. Proud Waiheke residents bemoaned his contempt of the place, and he has been reliably trolling it ever since.

Farrier, currently in Europe, used his interview for this story as an opportunity to have another nudge at Waihekians. “I sometimes troll people who post about their love of Waiheke Island,” he wrote in an email, “although the line’s blurred because I genuinely think the place is terrible. Honestly it’s so terrible. Maroon them there. Don’t let them off. Sink it. See, now I’m trolling I suppose. No, no - actually sink it. Put Waiheke Island in the bin.”

Author Richard Seymour wrote of trolls in the London Review of Books: “The troll has it both ways. He is magnificently indifferent to social norms, which he transgresses for the lulz, yet often at the same time a vengeful punisher: both the Joker and Batman.” 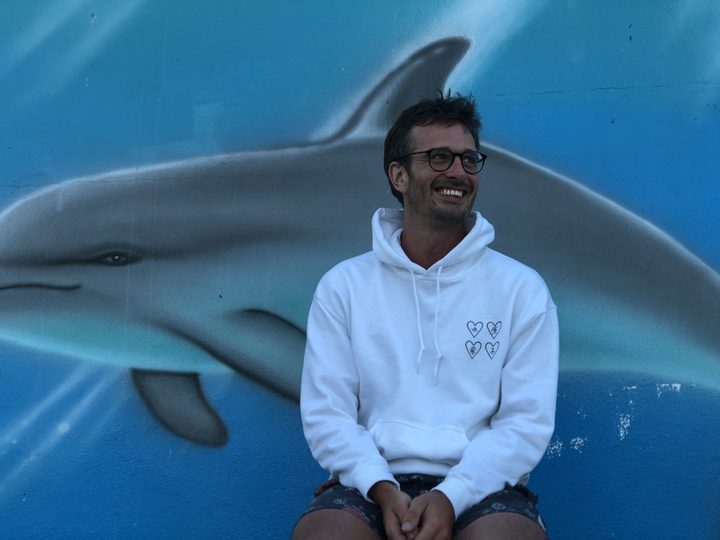 But it would be a stretch to describe Farrier as a vengeful punisher: his online efforts are, arguably, a harmless form of cyberbanter, or trolling, that undoubtedly irks people but presumably doesn’t have them crying themselves to sleep. Indeed, new research out of the University of Canterbury, by PhD student Maja Golf-Papez, has found that many trolls aren’t all bad, and in some ways they even benefit the internet.

Golf-Papez’s research found that while trolls and cyber bullies are often thought of as being the same thing, the two are easily distinguishable. “Both are trouble makers, but they differ in their practices,” she explains, on the phone. “Cyber bullies want to harm the target; they want negative attention placed on the target [whereas] trolls want to have fun and they want more attention on themselves. Trolls are deceptive and they are mischief makers, cyber bullies are more aggressive.”

Farrier recalls trolling as a teenager after forging friendships through online message boards that linked him to a community of like-minded music fans. The boards were occasionally visited by people ill-fitted to the community, and when they tried to weigh in on discussions he responded. He says his efforts to drive undesirables away never involved personal attacks — “It was just trolling stupid stuff they’d say,” — and trolling was his way to quality-control the forum. “Giving people shit is part of internet culture!” he writes. “But it depends where your motivations lie on whether it’s appropriate behaviour or not.” 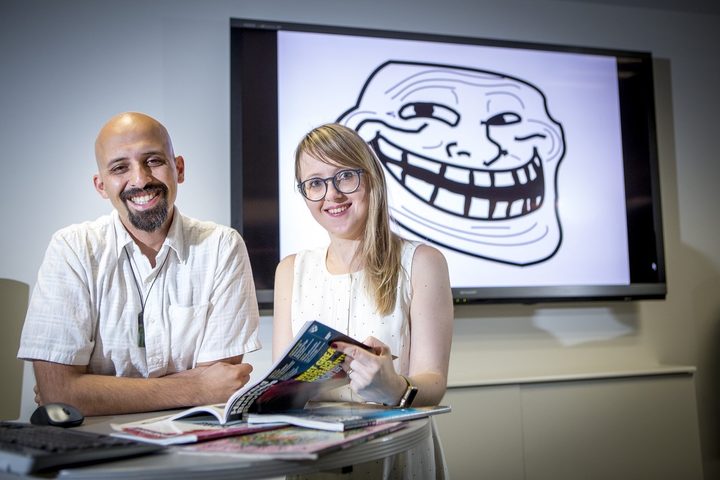 Maja Golf Papez, pictured with her supervisor Associate Professor Ekant, got the feeling she was being trolled as she studied them. Photo: Unknown

Golf-Papez spent almost two years observing the behaviour of online trolls for her thesis. “I thought they were assholes when I started out,” she says. But she was surprised by what she discovered. “I found some funny trolls, where it was impossible not to laugh. The target may not have found them funny, but I saw how trolling can definitely be entertaining for the audience.”

One of her subjects created a Facebook event called Punch Your Dog Day — he owned and claimed to love dogs himself — but told Golf-Papez he did it purely to get a rise out of animal lovers, who he believed were easy and hilarious targets because of a passionate advocacy for their pets that left them humourless and thus, perfect targets.

Golf-Papez observed trolls taking over forums by swarming in and deliberately changing the subject. Sometimes things turned nasty. There was one particularly dark live event where a troll, crossing into the realms of cyber bullying, convinced a technophobe to break his computer.

Hers is potentially important research at a time when internet behaviour still has grey areas. She says recognising the cyber bullies among the trolls will help create clear legislation and ultimately protect us and our young people. She doesn’t believe there should be laws against trolls. “For sure, it is not okay to harass someone, but if someone is trying to correct your grammar online, I don’t think we need a law against that," she says. "We have to have thick skin.”

In an effort to interview a troll besides Farrier for this story, I searched reliably troll-heavy sites such as Stuff and the Fluoride Free NZ Facebook page and tried to make contact. It was suggested I look in the mirror and I quietly backed away. Possibly an understandable reaction as while reading the comments, it was sometimes hard to tell who was trolling and who was being trolled. 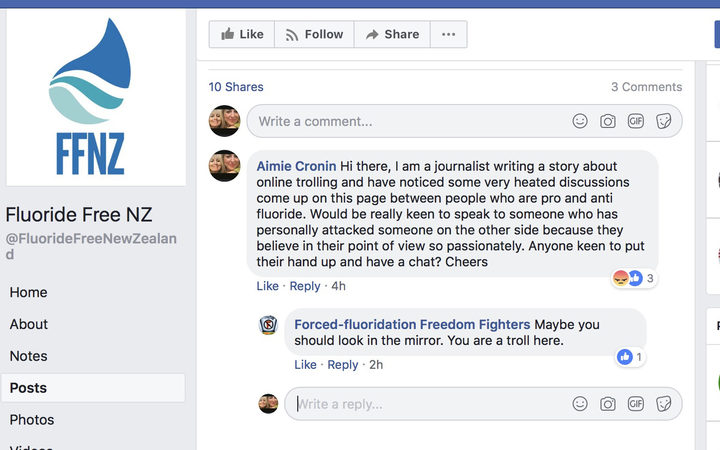 The author is accused of trolling. Photo: Unknown

Golf-Papez says this was a common reaction when she approached trolls during her research. “A lot of them thought that I was trolling them. It took me a lot of time to build trust and convince them to participate.” She says even when she locked in a subject, she occasionally felt she was being trolled when they only made themselves available for interviews at strange hours, like 3am.

She was surprised to find benefits to trolling beyond entertainment value: the increased traffic they brought to sites; the interest they generated and the number of shares after humorous exchanges became stamped on the internet in the form of memes.

Sometimes trolling can even have unintended positive consequences for the trolled. During the 2016 US election campaign, New Zealand’s Behemoth Brewing Company released a limited edition beer called Dump the Trump. Owner/brewer Andrew Childs remembers the extreme and sudden growth in numbers on the company’s Facebook page when one of its posts was shared to a right-wing page with half a million members: Behemoth began getting one-star reviews from an overwhelming number of white men wearing Donald Trump fan gear. “We had hundreds of people from that group give us one-star reviews, writing crazy comments. But the awesome thing was that when our Kiwi fans heard about it, five times as many came back and gave us five-star reviews. It was pretty awesome for us in the end.” Childs says in a couple of days, Behemoth got more traffic on its social media than it would in years and he would like to thank each and every one of the trolls that trolled him. 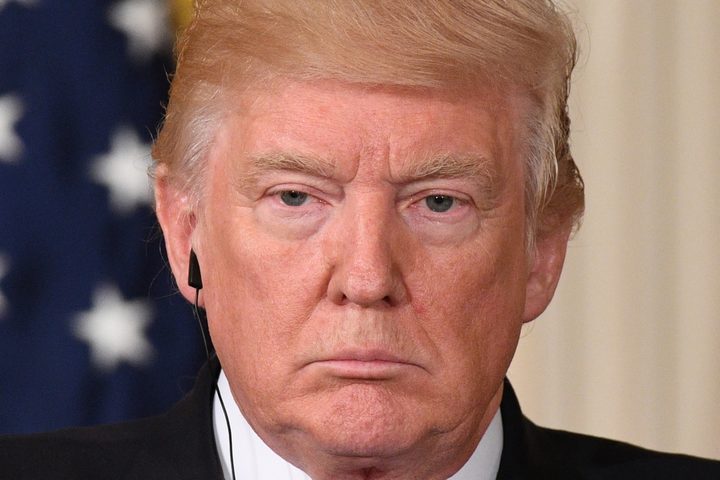 Ta-Nehisi Coates examines the power of the whiteness of Donald Trump for the Atlantic this week. Photo: AFP

Trump, is perhaps the most famous troll of all. “Every time I speak of the haters and losers I do so with great love and affection. They cannot help the fact that they were born f***ed up!” he wrote on Twitter in 2014. Almost 8000 people replied. His Twitter account bears examples of both trolling and cyberbullying, and his presence can’t be fully blocked no matter how much you might try.

But if they are a troll that can be blocked, should you block them? Farrier has been targeted by both trolls and cyber bullies and doesn’t hesitate: “If someone is being homophobic or nasty to me or someone else I’ll block in an instant. I go to Twitter for fun, not to read horrible shit about myself.”

Engineer Michelle Dickinson, also known as Nanogirl, became a well-known figure online after starting a blog and YouTube channel. She has encountered many trolls and cyber bullies during her time on social media and also recommends hitting the block button. “The trolls are decreasing as I increase my blocking function,” she says. “I don’t block willy-nilly, but I do think if people are being incredibly mean on topics that are very sensitive and emotional, then I do not need to hear their voice.”

Golf-Papez says the challenge lies in how to silence trolls when responding is exactly what they want. “Enablers keep trolls going,” she says. She hopes to do further research into what motivates them and what kind of people they tend to be.

After all, it’s all very well to say how entertaining it is when trolls descend upon conversations and trash them, but doesn’t this merely add frustration and stupidity to conversations, and serve to further alienate us from those who have different opinions?

So even if you don’t feel trolls should be blocked, pause is required at least, before pushing 'Like' and keeping the fires burning.