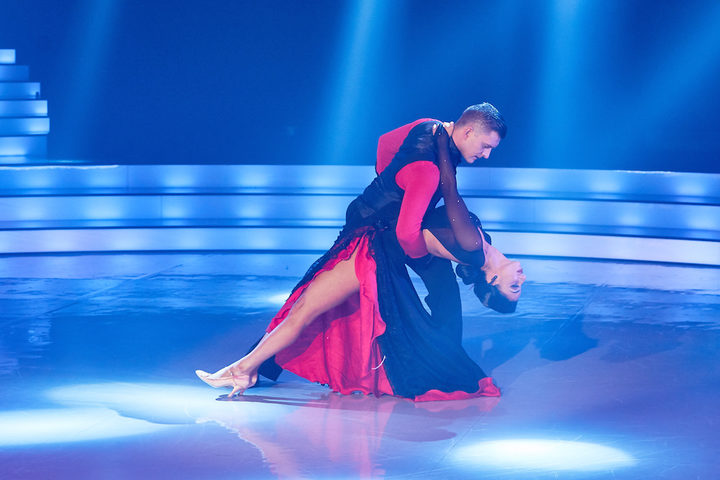 I'm hit with the revelation tonight that Judge Julz was the personal dance coach for Ryan Gosling and Emma Stone on La La Land, and I'm not being funny, but could we just can the show and hear about Ry Gos for an hour and a half?

Dai asks Naz about the chemistry on DWTS versus chemistry on the Bachelor, and she tells him that 'mine and Tim's chemistry is actually real'. There's the shade I've been waiting for. Sharyn asks them if they're dating, and there is way too much of a pause for me to believe her when she says no. Their dance is fine, but from now on I am watching them purely for any sign of a burgeoning love affair.

Sam Hayes (when did she stop being Samantha?) has the samba this week, and I feel like I can hear the wheels in her head turning as she dances. Judge Rachel echoes my opinion by saying the dance felt too cautious, so I think I might already be an expert? I was going to drag Sam for being emotional at the thought of the whole country seeing her dance, but then Sharyn talks about how mortifying it is for just one person to catch you dancing in your room, and I mentioned my repressed memories about that last week, so I'm willing to let Sam off the hook. Sam also mentions that she FRACTURED AN ARM doing a cartwheel once, so I think it's about time I take any possibility of me learning to do one off the table.

Jess and Jonny have the quickstep this week, and they were top of the table last week, so everyone's expectations are super high. I thought it was awkward. But everyone gushed about it again, so maybe I'm not an expert after all.

Shav (another rebrand? Is someone worried the show will run over time if we use full names?) is a huge dork. I really like her. We could never be friends because of my inevitable jealousy, but she might be my early hope to win (Suzy aside, obvs). Her and Enrique dance the rumba this week, and it is hooooottt. Are they both single? They are on my watchlist with Naz and Tim. Shav has a sore back this week too - the last time I hurt my back I lay on my living room floor and groaned for an hour. This show is really bringing to light a lot of my inadequacies.

Zac has a rebuttal for the Quasimodo comments - that he was actually a very loyal friend who saved his village. Yes Zac, but he was probably still a shit dancer... Zac talks about challenging what it means to be a man in New Zealand, and I'm annoyed because he's making me like him, and I'd prefer not to. He and Kristie are dancing the Viennese Waltz this week, and I really feel like he has hugely improved. The stage was covered in smoke though, so I wouldn't have noticed any shitty footwork anyway.

I watch Marama and Brad, and I can't help but smile the whole way through, because I bet she is a fucking nightmare to try to teach, but they look great (a score of 14 though - let's just reiterate that I don't know what the hell I'm talking about in the actual dancing department). Sharyn asks Marama how she feels about the judges' comments, and she replies that 'they're right, I do need to keep my legs together - I have had nine children, I should have learnt that years ago'. She is everyone's unpredictable aunty.

Chris Harris promises us that test cricket and dancing are completely different. An assurance that absolutely no one needed. He and Vanessa dance the foxtrot, it's good, he's likeable. He is less awkward than I predicted.

Rog's daughters make a special appearance again, and mostly spend their time laughing at him. And then he comes out dressed as a pimp, and I do too. There are people in the audience with Roger Farrelly masks on, and they look like Leatherface. Which is categorically not a good thing. Judge Rachel mentions 'eye-robics', and I think she means aerobics, but it could also be a dance term that I haven't yet come across in my extensive career. The general consensus is that Rog is a better entertainer than he is a dancer.

I feel myself softening to all the celebs as time goes on, which is very unlike me. However, tomorrow night I will be watching with a girlfriend who is not a regular viewer, probably with a wine or two, so things might get savage. Apologies in advance.