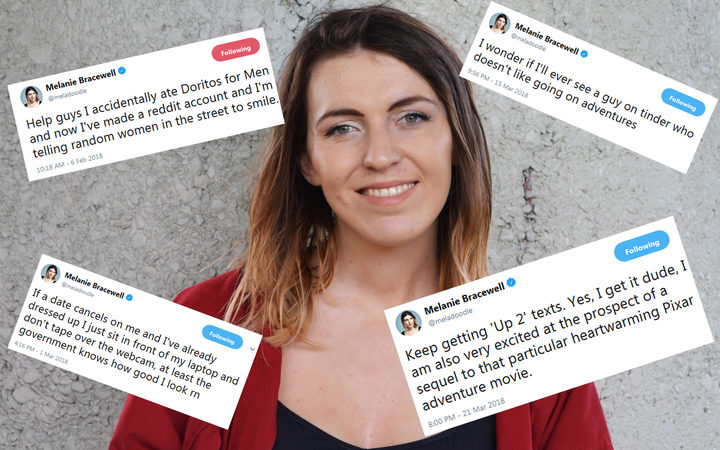 Sure, the 22-year-old comedian won the Best Breakthrough award, but she fell short of the ultimate prize.

Melanie started her Twitter account in March, 2009, and has been writing jokes on social media long before trying stand-up.

“Sometimes, if I think of a joke, I might try it out on Twitter and if gets no likes then I’ll know it definitely wasn’t funny and I’ll delete it straight away,” she says.

In a few weeks, Mel, who has appeared on 7 Days, written for The Project and produced Radio Hauraki's Breakfast with Matt and Jerry show, will perform her new stand-up show Melodrama at the NZ International Comedy Festival.

We picked eight of her recent Twitter gags and asked her to rate them out of five, and prove why she’s the greatest Twitterer of all time:

MEL: I think that might be a 3.5/5. That was one of those jokes I thought deserved a little more love, but when it didn’t get it, I sort of stepped back and realised that’s about right. I just love that phrase.

THE WIRELESS: You thought it deserved a few more Retweets?

THE WIRELESS: Melodrama is the name of your show. Who got there first - you or Lorde?

MEL: When you start out in comedy, people are always telling you to have a pun name for your show - puns that suit your name. So my show last year was called Brace Yourself. Melodrama fits so perfectly and I don’t really mind that Lorde came out with her album after me. I haven’t quite called it Melodrama: World Tour, but wait and see.

Keep getting 'Up 2' texts. Yes, I get it dude, I am also very excited at the prospect of a sequel to that particular heartwarming Pixar adventure movie.

MEL: Well, I can’t feel like I’m peaking too young. I need to best myself at all times, or else it’s all downhill from here. Some Tweets I think of and save as drafts, but that one I literally typed out as soon as it came into my head. It’s also a lie. I’m not getting any “up 2” texts. So if anyone wants to send me some “up 2” texts, that would be great.

THE WIRELESS: How long have you been doing standup?

MEL: About three years. I definitely grew up watching a lot of comedy, especially with my dad. But I didn’t see many New Zealand comics, and certainly didn’t see many women. It was only when I started doing my online thing on Twitter and Tumblr that I saw others doing it and decided it was something I could do as well.

The best thing about high school was being able to get free drinks at parties by being like "oh man, is that vodka? what's that like I've never tried it"

MEL: That’s a great tip, but one I probably wouldn’t be able to get away with these days. Probably another 3/5.

THE WIRELESS: It’s also perhaps a joke we shouldn’t publish.

MEL: Yep. Let’s just say I only did this in the days after I turned 18. I was held back! This is one of those jokes that’s incredibly silly and came out of a conversation I had with some friends I met through Tumblr in Brisbane. We were talking about all the crazy Tumblr parties they used to have and the tactics of getting free drinks. So I suppose the main point of this joke is - boys are stupid.

THE WIRELESS: You made friends through Tumblr?

MEL: Tumblr is a website for people who don’t have any friends. I was invited to one Tumblr party and it was craaazy. Definitely the craziest party I’ve ever been to. Someone got an impromptu stick and poke tattoo there. It’s no good.

MEL: I reckon another 3.5/5. I don’t know if you’ve been on Tinder, but that’s pretty much every profile on there. And then we’ll meet up and just go to Kebabs on Queen, or something.

THE WIRELESS: I suppose that’s an adventure. Who knows what that meat really is?

MEL: This is true. Such an optimistic point-of-view.

THE WIRELESS: Do you incorporate dating and relationships into your comedy much?

MEL: Hmmm, probably too much. It was the theme of the first show I did with Angella Dravid because it’s so easy to write about. Dating is incredibly funny. Everyone’s experiences are unique, and you’re not saying the same as every other comedian. Whereas if you’ve got some material about Bitcoin … actually, that said, I’ve got a big Bitcoin bit in my show. No I don’t. But I do come across dudes on Tinder who say, “You’re not going to write some jokes about me, are you?” No dude, you’re not interesting at all. The people who inspire jokes are usually blissfully unaware.

If a date cancels on me and I've already dressed up I just sit in front of my laptop and don't tape over the webcam, at least the government knows how good I look rn

MEL: This could be a 4. I just think it’s a funny image - just me sitting made-up and posing in front of my blank laptop, hoping for the best. But I don’t actually know how much we’re being spied on.

THE WIRELESS: You wrote an episode for Paranormal Unit - Jemaine Clement and Taika Waititi’s spinoff series to What We Do in the Shadows. How did that happen?

MEL: It’s now actually called Wellington Paranormal, you idiot. Do your research. Please. I had never met Jemaine Clement, but apparently he had been reading my Tweets. He asked a few people to pitch some ideas and I was one of them. I didn’t really know what I was doing and was just constantly worried he would read what I’d written and be like, “I guess Twitter isn’t everything.” But I got chosen to go to Wellington and do some storylining and outlining and drafting … there were so many phases. But I managed to make it through and it turned out to be an amazing experience and I now know I can write a 20-minute episode of something.

Help guys I accidentally ate Doritos for Men and now I've made a reddit account and I'm telling random women in the street to smile.

THE WIRELESS: This is definitely a classic. I know this because it’s pinned to the top of your profile page.

MEL: It is less relevant now. I Tweeted that when 'Lady-Friendly' Doritos, that had less crunch, were in the news.

THE WIRELESS: You like to joke about issues like gender equality. And while it features in your comedy, it’s obviously an important issue to you.

THE WIRELESS: Sorry, that’s the question.

MEL: Cool. It was a sentence, but I get what you’re trying to say. I feel like it’s important to talk about what you’re passionate about and comedy is a great way to do it. As a comic, you look at the world through a specific type of lens, and I definitely notice the patriarchy. My dad wants me to fix the world and take down the man, but I’m not sure I’m quite at that level. But I do like to look at injustice and also unpack it because it can be hilarious.

MEL: A solid 4, but I don’t know if this one is suitable for the public broadcaster. I’ll be honest, I still play Neopets. It’s quite a relaxing game. A co-worker just walked in and gave me a look. I remember there were other words that were banned like ‘advertisement’ because ‘semen’ was in it. That was a big learning period for me.

THE WIRELESS: Wow, I’ve never realised ‘semen’ was in ‘advertisement.’ Does Neopets feature in your stand-up at all.

MEL: I did actually have a bit in my last show about how my friend in high school betrayed me by stealing a million Neopets points from my account. Literally two weeks ago he finally paid me back and sent me all the points because he’d felt guilty after watching a video of my show.

I dropped my credit card and this guy in a fedora picked it up and said "is this your card?" and for a second I thought he was a magician.

THE WIRELESS: What’s your dream? Is there a five-year plan?

MEL: This is one of those questions I get asked very often. My manager, for instance, has definitely put this one to me. But it’s only been about three years since my first open mic performance, and back then I would have thought being on 7 Days was, like, the pinnacle. Now, the dream and the potential keeps expanding, and in my wildest thoughts I think, “wow, I’d love to be on Saturday Night Live,” or something. Writing for Wellington Paranormal, for instance, showed me I could do things I had never imagined.

Melanie Bracewell performs Melodrama in Wellington from May 8-12, and Auckland from May 15-19. You can suss tickets here.