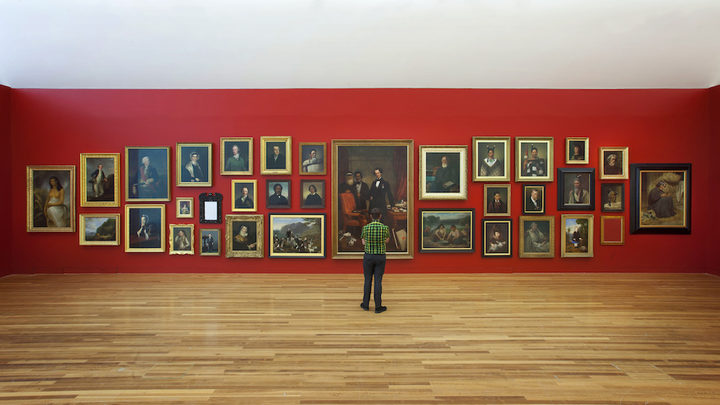 The portrait room, Nga tai whakarongorua | Encounters, lies at the heart of the exhibition Tūrangawaewae: Art and New Zealand in Te Papa's new art gallery, Toi Art. It was curated by Curator Mātauranga Māori, Matariki Williams (MW) and Curator Historical New Zealand Art, Rebecca Rice (RR). Here, they share some of the big questions and ideas underpinning the exhibition and discuss some of their favourite portraits.

MW + RR.
One of the first questions people are likely to ask when they see this wall is: Who are these people? The answer: They're friends, they're artists, they're royals, they're rangatira, they're husbands and wives, they're someone's children - they're both known and unknown, both private and public figures.

All, though, are people of this place and connected to this place. The portraits represent multiple encounters from pre-Cook through to the early twentieth century: encounters between different people, between artists and their subjects, and now as the exhibition opens to the public, between the portraits and visitors to the galleries.

The portraits were all painted or made for different reasons: to picture eminent individuals, serve as reminders of loved ones, capture a moment of childhood innocence, represent the exotic 'other', represent the othered self in a changing world, or to demonstrate the artist's consummate skills. Whatever their subject, whoever the artist, and whatever their background, these portraits all have stories wrapped around them.

The portrait room's te reo title, "Nga tai whakarongorua," suggests a state of being in two minds about things - that you can listen to both sides of the story, and it's important that we're not trying to resolve that for you. These threads are not binary, but can diverge and converge - offering a sense of understanding of each other on both sides.

These portraits have come from far and wide, but all have a connection to Te Papa here and now. Together, they represent Te Papa's whakapapa, a whanau wall of sorts. 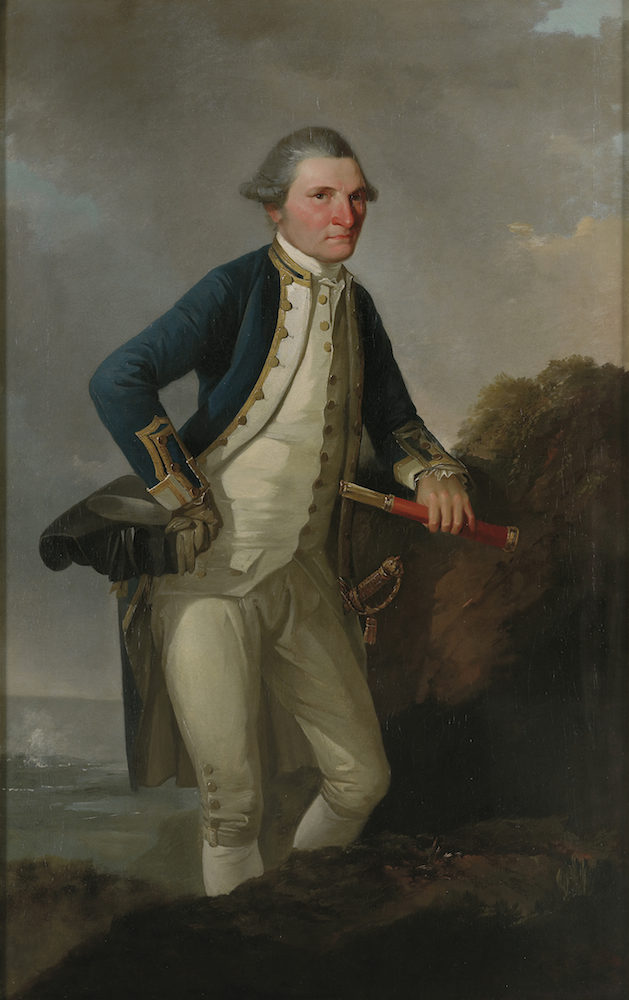 MW. Here we are with Captain James Cook. A man who is the starting point of a very messy history, a man who, in many Māori and Pacific communities, is not well-liked. I'm trying desperately to remain diplomatic with my language here, so do you want to talk about this portrait and its inclusion in this gallery?

RR. Very diplomatic. I fully appreciate that the history of this place did not start with Cook, and your decision to pre-figure pictures relating to Cook's voyages with the remarkable taonga, the pūtātara, Te Umukohukohu, really grounds the portrait wall. What to say about Cook, though? Perhaps if we shift the focus to the artist, John Webber? One of the great things (from my point of view as an art historian) is that Cook took an artist on board each of his voyages. Webber was the artist on the third voyage and made numerous sketches and drawings of the places, peoples and cultures he encountered, which he later worked into paintings.

MW. And between Te Umukohukohu and the portrait of Cook is Poedua, a high-ranking woman from Tahiti, who is also painted by Webber. The beauty of the portrait of Poedua belies the violence behind her capture, and more broadly, the rupturing results of Cook's voyage to the Pacific. For many, these voyages signify a violence that was reckoned upon body, whenua, language and culture, and while we held this in mind - could we have excluded him from the wall? Probably. But, through the way we hung him in this exhibition, we have at least mitigated his impact by giving prominence to the surrounding narratives. 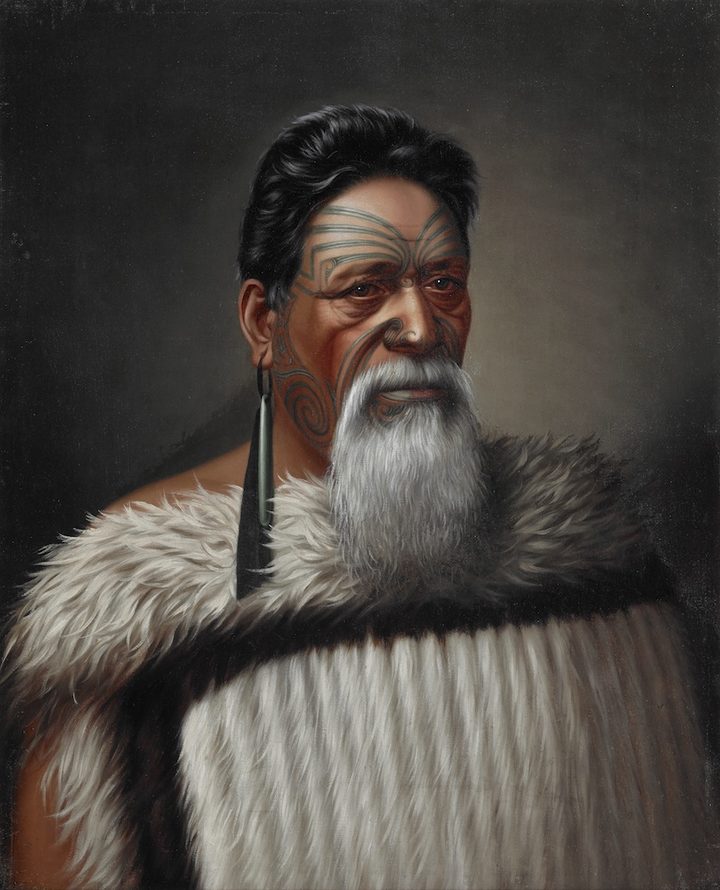 MW. In this exhibition we have acknowledged the whenua that Te Papa is on. We want to acknowledge the people and iwi who were crucial to the building of the greater Wellington region - Te Ātiawa and Ngāti Toa specifically are prominently featured. The Te Ātiawa rangatira, Wī Tako Ngātata, is one of these people, and is actually on the wall twice. In fact, he is the only person whose portrait features twice on the wall.

RR. True, on the wall, he's painted by two different artists, but interestingly Lindauer often painted different versions of his portraits to meet the demands of clients. There are at least three known Lindauer paintings of Wī Tako, all based on the same 1870s photograph. This version plays up the traditional card with Wī Tako dressed in a resplendent kahu kurī and wearing a pounamu pendant. It ended up in the collection of Pākehā collector, Alexander Turnbull. Ironically, there's another in the Alexander Turnbull Library collection that pictures Wī Tako in a European dinner suit.

MW. What I like about this range of portraits, and the way that he is depicted, is the way in which they reflect the realms of influence that Wī Tako existed in. He was significant to his own iwi, to Pākehā who were continuing to settle in Wellington, and to other iwi as part of his involvement in the establishment of the Kīngitanga - though he did later withdraw support for the Kīngitanga movement. 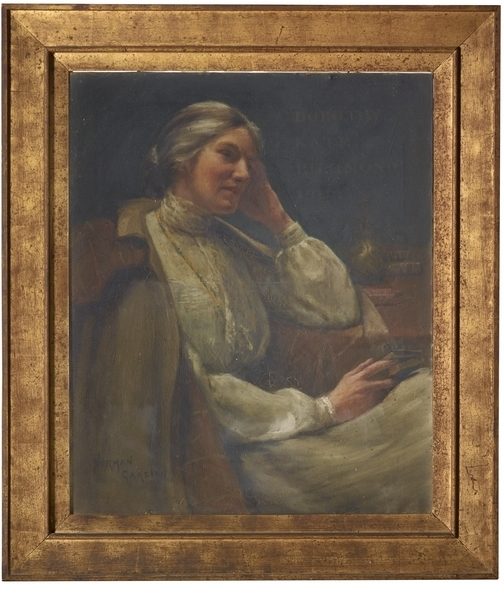 RR. I have such a soft spot for Dorothy Kate Richmond, one of New Zealand's first female artists to study abroad at the Slade School in London. There, she embraced bohemianism and adopted "aesthetic" clothing - a reaction against the intense corsets and bustles of the 1880s - a style she exudes in this portrait by her friend and teacher, Norman Garstin.

MW. What I love about this portrait, aside from how wistful she looks in her non-restrictive, soft-looking coat, is what the inclusion of her portrait highlights. This year marks 125 years of suffrage in New Zealand and it is as good a time as any to reflect on how we, as the national museum, historically and currently represent women in our collections. I know this is an important kaupapa for you too.

RR. Indeed, D K, or "Dolla" as she was known to her family and friends, always comes to mind when I think of awesome women from our history. She was a core member of Wellington's New Zealand Academy of Fine Arts, but was never elected to a position of responsibility. Instead, she headed the ladies' committees for catering and fund-raising (just imagine). But, and I love the underhand influence at play here, she used her "taste and judgement" to urge purchases of work by female artists such as her great friend Frances Hodgkins.

MW. She is also the only woman artist featured on the wall, which is a definite statement we wanted to make about the representation of women artists, but I'm glad that, given how instrumental her support was for other artists, that it is D K we've chosen to highlight. 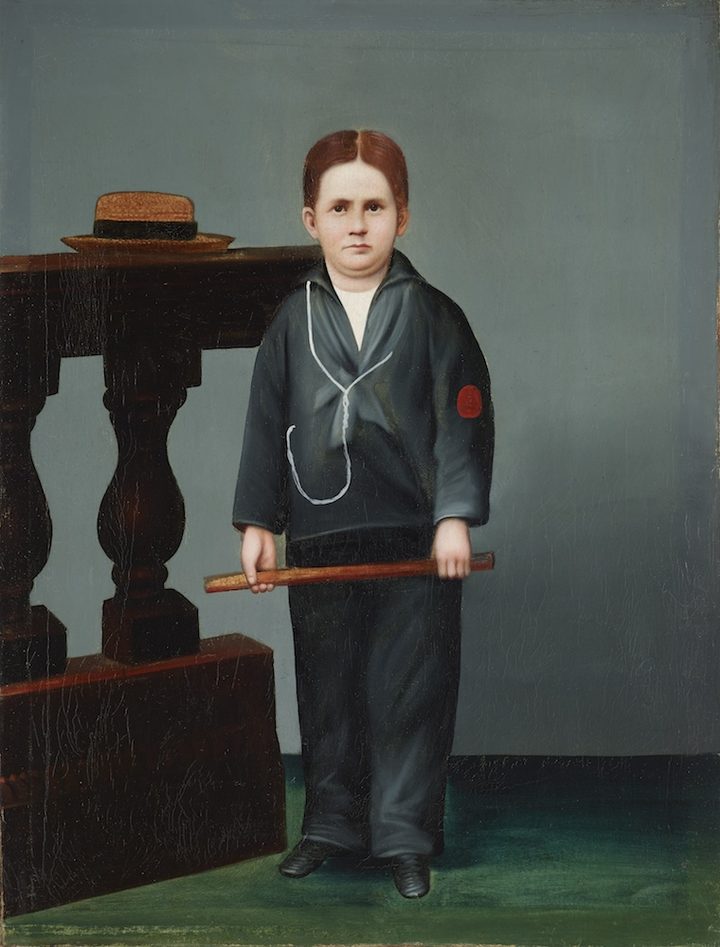 RR. What's not to love about this incredibly awkward portrait of a boy with a double chin? Unfortunately, we know very little about him, who the artist was, or why he had his portrait made.

MW. I find him adorable, in spite of the unfortunate title! He's also hung at kid height, along with the other portraits of kids so that our younger, smaller visitors have friends to engage with. You've mentioned as well, that this is his first time on display - what a time to debut.

RR. That's what I've enjoyed so much about working on this exhibition. It's given us the space and freedom to bring some real gems out of the storeroom that haven't been on show for a very long time. It's been a great way to re-engage with these works, to try and find out more about them, and for the painting conservators to have the opportunity to work on them.

MW. Yes, in our evolving relationship with this little boy, we've uncovered some oddities about his portrait including his three-fingered hand, and the contrast between the beautifully-executed painting of his face and the more naive rendering of his body and surroundings. 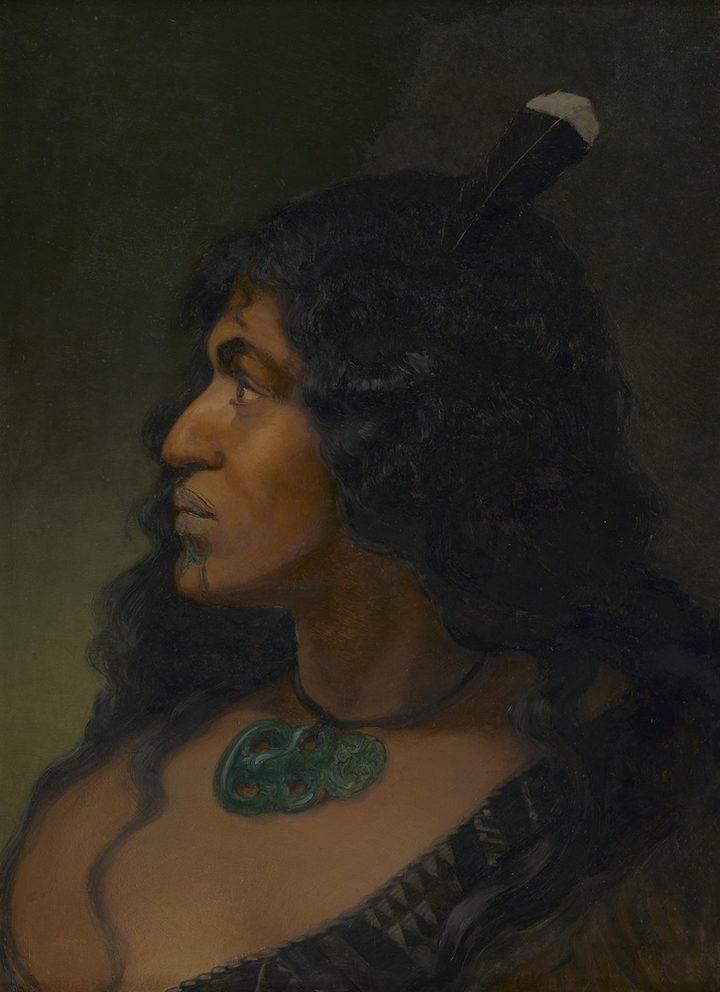 MW. Tēnei wahine. She gets me every time. Her identity is unknown to us, regardless she remains a powerful presence. Including her, and other unidentified people was important to us. Despite us not knowing her, the mana of these people endures. This woman also signifies another key curatorial aspect for the room: that we look again, that we look closer and that we look deeper.

RR. I don't know if Wilhelm Dittmer would have anticipated this response to his work 100 years later, but he certainly painted women with a combination of grace and strength. I love his choice of the profile portrait for this woman, which really heightens her sense of autonomy.

MW. There is only one other portrait by Dittmer in the room, and as with "Māori girl," his identity is not completely known. It is simply labelled "Taketake (Wanganui chief)," and yet the museum has never managed to verify his whānau or any descendants.

RR. That's true. We know a bit about where Dittmer travelled - to Tokaanu, for example, to make sketches of people and the landscape, and some think the Māori girl may come from there. But he also had a studio in the old Colonial Museum (Te Papa's predecessor) and it's likely that the director, Augustus Hamilton, provided him with a photograph of Taketake to work from.

MW. We have taken this kind of approach in exhibitions here before - displaying portraits or photos of people we don't know, and asking the public for any information they might have. Imagine if this exhibition enabled us to identify "Māori girl," or for Taketake to be reconnected with his whānau.