Is there a line? 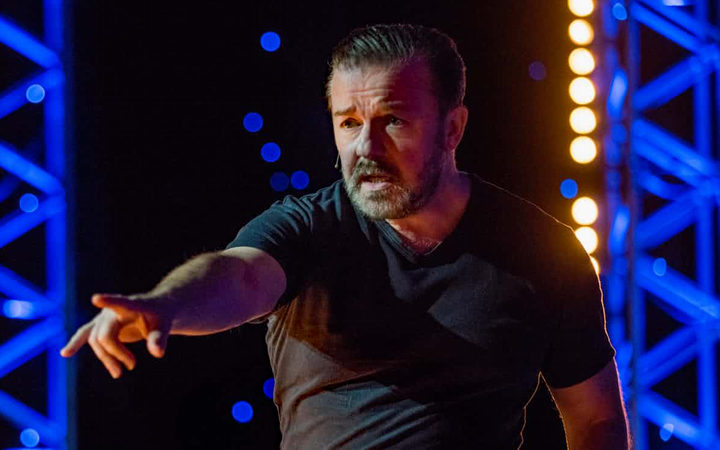 Ricky Gervais loves pushing boundaries and winding people up - he admits as much in his new standup special, “Humanity,” which dropped on Netflix last night.

He also loves yarning about how funny he is.

This was the gag:

“I’ve changed. Not as much as Bruce Jenner. Now Caitlyn Jenner, of course, and what a year she’s had. Became a role model for trans people everywhere, bravely breaking down barriers and destroying stereotypes. She didn’t do a lot for women drivers.”

In “Humanity,” Gervais says he received backlash for the joke, but explains its target was a celebrity’s bad driving, referencing a near-fatal accident Jenner was involved in near Malibu in 2015.

“That’s a clever joke, and I’ll tell you why. It’s layered. The subject of that joke is stereotypes, I’m playing with the notion of stereotypes. So, I start off saying, ‘She’s a real woman.’ Some would say, a liberal progressive attitude,” he explains.

He says the reason for much of the backlash was his referring to Jenner as Bruce.

He continues to joke about Jenner’s genitals, before his clinching comment on gender dysphoria:

“I’m not one of these bigots who think having all that done is science gone too far … in fact, I’ve always identified as a chimp. Well, I am a chimp. If I say I’m a chimp, I am a chimp. And don’t ever dead-name me, from now on you call me Bobo. I’m going to have species realignment.”

“There is a disingenuous attempt by Gervais to assure his audience that he’s not a bigot right before the joke. But by continuing to the punchline, he acknowledges real beliefs, held by many people about trans and gender diverse identities without adding any critical edge,” Rainbow Youth said.

“The joke instead just lazily reinforces these beliefs which lay at the root of the discrimination and violence that many transgender and gender diverse people face.”

“When someone like Ricky Gervais uses his public platform to pass transphobia off as comedy, the impacts can be incredibly harmful - millions of people are exposed to it,” she said.

“Using trans women as a punch line in comedy contributes to the disproportionate amount of violence they are already facing, and reinforces ideas that trans people are just here for the entertainment of cisgender people, or that their identities and experiences aren't really valid,”

The US entertainment website IndieWire said Gervais’ reference to chimpanzees reflected “the most common and insidious arguments used by conservative and religious groups to deny transgender people basic human rights”.

“This is the exact same logic used by opponents of same-sex marriage who claimed people would start marrying animals if it became legal, made by a man who claims he is ‘progressive’ and ‘not a bigot’. The most dangerous part of the whole thing is that his audience likely thinks of themselves as liberals, too, as they cheer and clap for a chimp impression that equates transgender people with monkeys,” the website said.

Reaction to “Humanity” hasn’t just been negative. A review in The Guardian defended Gervais’ right to an opinion, and his argument that there’s no such thing as off-limits in comedy:

“He deserves to be called out on his routine poking fun at the idea of transitioning, but I do think that the concepts he zeroes in on (“deadnaming”; identity as self-assertion) are fertile for comedy, precisely because they’re new, they’re destabilising, and (whether you welcome them or not) we’re still establishing where the boundaries around them lie.”

Last year, Michele A’Court told The Wireless her basic philosophy is there’s no topic her fellow comedians shouldn’t be able to joke about.

Yet she said there were two important factors to consider.

“What matters to me is who has the power in the joke and who is the butt? Somebody gains power and loses power in every joke. That's one of my benchmarks when I'm hiring comedians - a comedian can't take the high ground and make the victim the joke.”

The other factor? “It has to be funny.”