We used our social media bubble to crowd source this unscientific survey of people’s thoughts. 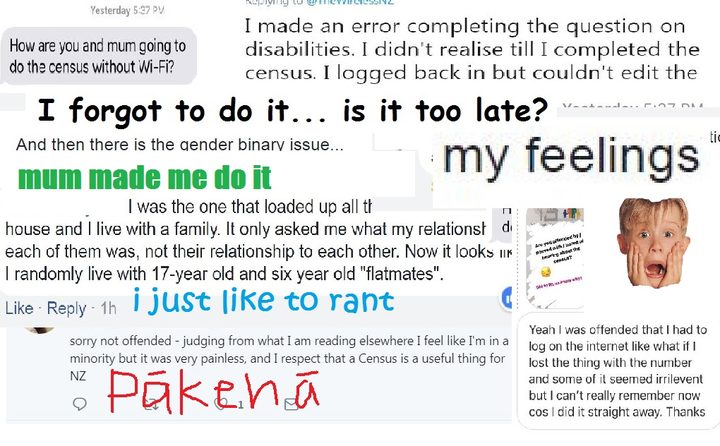 Some of you took this question more seriously than others:

“I really wanted a section where it asked about my feelings or something.”

“I'm not "religious" but that doesn't stop me being a mystical humanist, pan-psychist, believer in global consciousness (Mind). It's a dumb question with a myopic dualist presumption. Time to evolve your thinking maybe.”

“[I was offended] that I had to do it. It never occurred to me I would. And then mum made me.”

“Surprised there wasn't more questions...thought it could have been more exhaustive. Or exhausting.”

A lot of people found questions about ethnicity problematic:

“I identify as Pākeha way more than "european"... feel like they could have put a little more effort into their inclusivity.”

“The ethnicity category sucks. NZ European but no NZ Chinese or NZ Indian, for example, just seems so offensive.”

“My whole whanau checked ’other’ with ’Pakeha’ (like many I know - I did it in addition to my Maori). And then there is the gender binary issue…”

And then there was the gender binary issue:

“The lack of gender options was ridiculous, plenty of other institutions allow for a gender diverse option so I can't see why our census can't offer that option at the very least.”

“The gender thing. If they can have a text box for religion, they can have one there. It's pretty easy to see what are joke answers and what are not. And the whole trans healthcare debacle shows the need for actual solid numbers.”

There was also confusion, panic and technical issues:

“It asked me what my specific relationship was to my male flatmate. It didn't mention my female flatmate at all; ‘WHAT IS YOUR RELATIONSHIP TO BEN?’ *squeal of fright*"

“I was offended that I had to log on the internet like what if I lost the thing with the number and some of it seemed irrelevant but I can’t really remember now cos i did it straight away. Thanks.”

"How are you and mum going to do the census without Wi-Fi?"

"I can't use the internet." (This survey response was received in person, from my mum).

“I made an error completing the question on disabilities. I didn't realise till I completed the census. I logged back in but couldn't edit the form.”

“Miss Jasmine [Miss Jasmine is a child] found it very hard to answer her part (under my name as a parent obviously) as it had no allowance for children to have multiple/equal living arrangements. It must skew the data so much, our two living, housing, travel, lifestyles arrangements are a polar opposite.”

“Bf got very annoyed that they wouldn’t accept his religion because it had a semi-colon. i had romantic ideals of staying up late, doing the census together over a bowl of ice cream. instead.....he got incredibly frustrated at stats nz for not accommodating his semi-colon!”

“I couldn't do it as someone in my household likely threw away the letter ... so we couldn't access it due to not having the necessary code - and then when I try and get the number online via the help link it turns out they just post it to you again anyway so I have to wait again until I can fill it in.”

AND SOME PEOPLE THOUGHT IT WAS COOL AND EASY:

“Sorry not offended - judging from what I am reading elsewhere I feel like I'm in a minority but it was very painless, and I respect that a Census is a useful thing for NZ”

“It's our first go at online. Important and not toooo shabby attempt (say compared to Aussie).”

"I thought it was cool and easy but I'm a cis white middle class lady so life in general is reasonably cool and easy."