Stories from the other side of the bar. 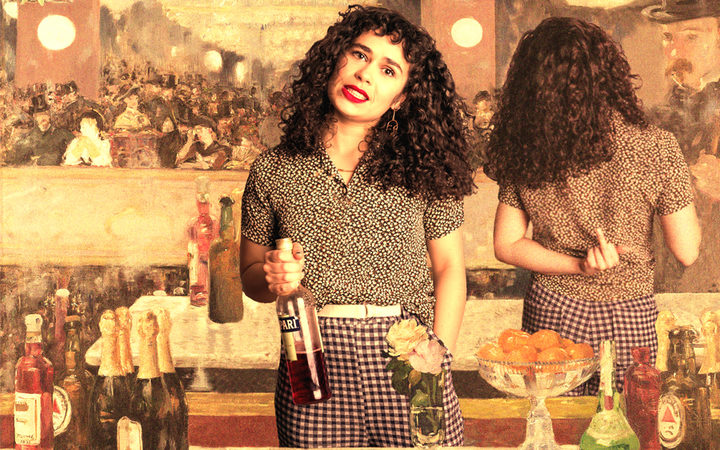 It is a well-worn cliché that bars are a place to share your life’s woes with a sympathetic bartender who always knows the right thing to say, and knows the right drink to offer to help drown your sorrows. But what if you went to a bar and it was the other way around, where the bartender shared their own stories?

That is the basic premise of Saraid Cameron’s Auckland Fringe Festival show, Drowning in Milk, where 18 audience members are invited to sit around her custom-built bar and listen to her experiences with racism and sexism.

As the daughter of a Sri Lankan and Indian mum and a European dad who spent her childhood in Hamilton, Auckland, Christchurch and Wellington, Saraid’s stories are hard to hear, but even harder for her to share.

During the half-hour show she makes two drinks for the audience members – one called Touch of the Tar Brush and another called Drowning in Milk – the ritual helps to keep her hands busy and her eyes focussed as she shares some of her most private memories with a room full of strangers, she says.

But there is a lightness to the show too, like when she lists moments of racism she faced at school like a roll call, and then allows the list’s sheer ridiculousness to sink in with a long shake of the cocktail mixer.

The show is named after comedian Richard Ayoade’s rather apt description of Iceland’s Blue Lagoon as looking like “a bunch of white people drowning in milk” – a moment Saraid says she laughed so hard at she had to re-watch it seven times.

Ultimately, she hopes the audience will go away and educate themselves on these issues further, rather than asking her, and other people who look like her, to do the heavy lifting for them.

At the end of the show’s run, which has already sold out ahead of tonight’s opening, Saraid hopes to lend her bar to other artists for their own version of Drowning in Milk.

Where did the initial idea come from for the show?

I just thought how cool it would be to do a show where you said stuff you wouldn’t normally say in public, I suppose, but if everyone had a drink it would be so much easier and I kind of thought I would do it at a bar. But then my friend Nisha I talked to her about it and she told me about how there are micro bars in Japan that are really small and you go in and you cram in together. And then I was like, OK cool I need to build a bar.

What are some of the things you will be talking about?

I don’t want to give it away. I am talking about the things that have happened to me that have made me feel the way I do about whiteness and maleness. It’s mostly whiteness in this show though, but often of course the two go together, to fuck you up in various ways.

I’m not trying to tell anyone at all or give any advice ... It’s like, this is what I’ve seen, this is what has happened to me and this is how I feel about it. That’s it.

I feel like you only get over things like prejudices and things you’re scared of and people you’re scared of and ideas that scare you if you talk to someone who has a reason to believe in them. So I mean like, I hang out with dudes who talk shit about feminism sometimes, and I’ll be like, well, have you ever had $5 left in your bank account and not been able to afford $7 tampons?

Are you trying to make it easier to talk about and listen to these issues by offering everyone at your show a drink?

It is relaxing. It is lovely. I think that there is a ritualistic aspect to it or a cultural aspect to it in terms of, like, my family will always talk about things over food or drink. It’s like if you were talking to a friend you would do it over a drink, which is part of why I think the drink aspect is nice.

Also I think it is intimate. I am asking people to buy a ticket to listen to stories about my life, so I think that it is kind of a nice exchange. But as well, I don’t ever really know where people fall on the spectrum of understanding this kind of stuff. And I have experienced mad hostility from people who I thought would get it.

I think that maybe people will be really offended by some of the things I say about whiteness, but maybe they’ll be less offended if they have a shot of something. Because really, people get really upset, because they think that something is being taken away from them or said about them, when you are only talking about something that happened to you when you were five that they had nothing to do with. Obviously they’re complicit in some way.

It’s lovely to have a drink and talk about anything, I think. I like that it’s coming back from the performer as an exchange and also I really don’t know how people are going to receive it, so I am pre-empting the worst.

When you talk about hearing these issues from a different voice, are you referring to yourself, as you being brown and a young woman, that being a different voice to what is predominantly in the arts scene, which is white, old, male?

But the way that I am as a person … literally white friends will get drunk at parties and be like, ‘Okay, so, this thing happened to me, tell me about it’. I’m like, ‘I don’t know. I don’t want to tell you about it, or I don’t want to tell you what you did wrong’. Or people would come up and say, OK, I really want to ask you if this thing was bad’ and I don’t ever want to do that.

They want you to be the representative voice for a whole culture ...

When I see brown women being articulate about their experiences, I feel so energised. And they don’t have to be South Asian like me, they can be any kind of non-white woman, or even just a woman or a non-binary person, but it’s really inspiring and it gives you confidence for your own activism or your own expression, when you see other people be fearless about it. I think it’s wonderful.

Are you conscious about people switching off when confronted with these issues?

I would definitely be worried about people being so challenged that they shut off but I think I have to tell myself that … I think it’s because you feel shame.

When I tell someone about something really awful that happened to me like a time a guy touched me without my consent or a time that someone grabbed my hair and told me how nice it was while they still had their hands in my hair. I feel gross saying that to someone. You own the shame that they should have felt.

I think that I have to tell myself that my experiences are OK to be shared and it doesn’t reflect on me, so if someone shuts down it’s their problem. It doesn’t mean I should stop talking about it.

It’s like with the #metoo movement. Lots of women haven’t talked about this because you feel dirty when you talk about it or you feel like you’re feeling it again or you feel the shame of it again and yeah, some things people have said to me about the colour of my skin … when I repeat it it feels like it’s happening again and I feel disgusting and I feel conscious of how that person I’m telling feels as well, so it’s so much easier not to talk about it, sometimes.

You’re just telling someone about something that someone else did to you, but it moves through you first for so long.

Is there a part of you that is frustrated with the need to basically cut yourself open and bleed for people to really get it?

Yes, absolutely. This is like a shorthand way to do so, so I hopefully don’t have to do so again. I don’t want to. I want to do it in a way that I’m getting paid for it, because it’s not fair otherwise. So I want to do it and use it for my theatre.

I don’t want to do it when someone asks me a question and the only way I can make them understand why what they think is fucking wrong is by saying all these things, which all hurt to talk about.

What do you hope audiences will take away from the show?

It depends who the audience member is. As I’ve said, I don’t really know how it is going to feel for them and I think it is massively going to depend on the demographic. But it would be nice if people listened without thinking too much and then went away and did their thinking and talking elsewhere and among themselves.

Is there a chance that people might try to respond to some of what you’re saying?

I don’t know. I do say at the start, “I’m going to talk and you’re not going to talk”. But maybe. I’m just going to manage that. I think a lot of people will be coming hopefully with enough sensitivity to not do that. I’m not a fucking comedian, I don’t want to respond to hecklers. I will just be like, “You can go”.

*Drowning in Milk opens tonight at Q Theatre as part of the Auckland Fringe Festival.