Start a band, take the stage. 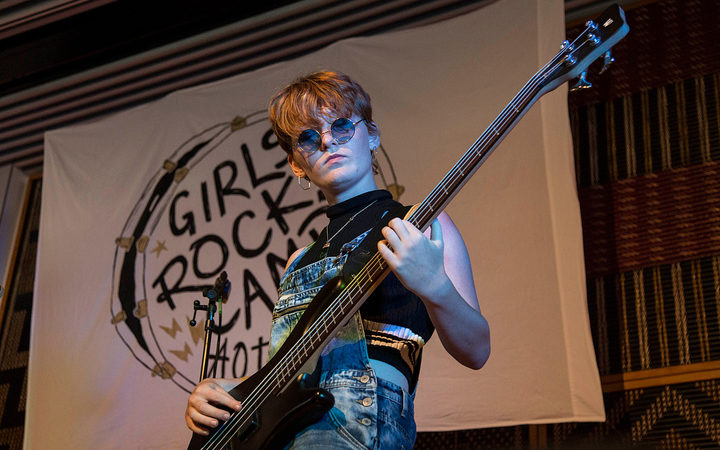 Pictures of female musicians ripped from magazines lined the corridors of the Music and Audio Institute of New Zealand on Friday last week. As 40 young musicians moved between lessons, band rehearsals, live performances and workshops, images of Ladi6, MIA, Robyn, Destiny’s Child and TrueBliss watched over them like deities.

It was the last day before the showcase of the first ever Girls Rock! Camp Aotearoa and the campers were busy with their tech rehearsals. For most of the aspiring musicians, it was their first time working with an audio engineer.

In the four days leading up to the rehearsal, aspiring musicians between the ages of 12 and 17 had been put into bands and wrote original songs to perform at the end-of-week showcase, to be held at the Ellen Melville Hall in downtown Auckland. 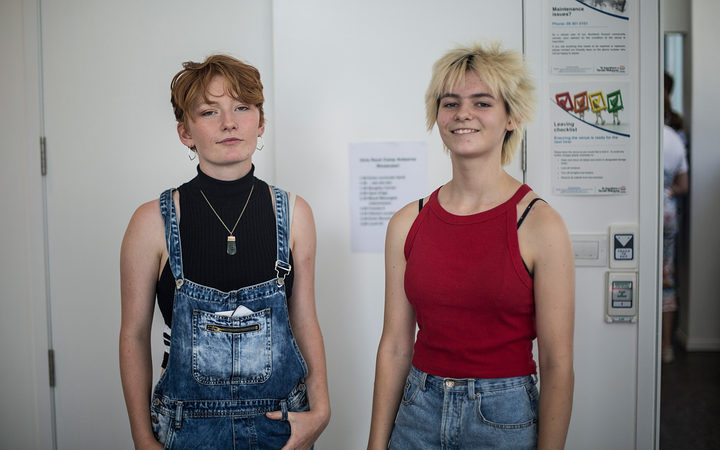 Girls Rock! Camp was started in 2001 in Portland, Oregon with the aim of encouraging more girls, trans and gender non-conforming youth to pick up an instrument and find their confidence as musicians.

With campers from all different backgrounds and musical abilities, the Auckland camp organisers were keenly aware of the need to create a safe environment for the teenagers to get to know themselves and each other.

Each day started with a warm-up exercise and a waiata, and on Friday one of the campers had gained enough confidence to lead the waiata herself.

Nicole Gaffney, who organised the camp along with Kat Saunders and Jana Whitta, says the week had been an inspiring and emotional one for her.

“You’ll notice it in the band practices when they finish playing a song and they’re all just so stoked that they’ve done it. The amount of support that they give each other and try to make each other feel comfortable is incredible.

“Because that’s something that we’re - as mentors and as the sort of adults in the room - trying to make sure happens because we’re trying to make them have a really good time, but they’re doing it for themselves, we don’t really have to be here. They’re just doing it. It’s amazing.” 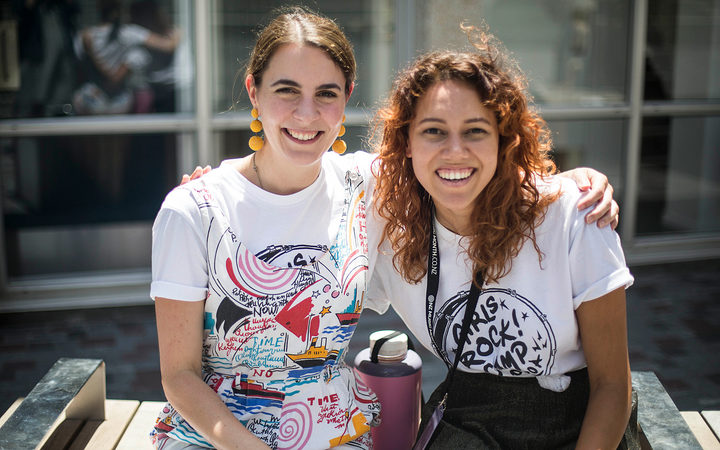 Nicole has wanted to bring Girls Rock! Camp to New Zealand since she attended the Canberra one two years ago.

“I just want to help young women play music because I never had that help.”

She says what pushed them to get the camp started was “stuff with awful men being really gross towards young women in our particular music scene”.

“We need to make sure that this generation has the support that we didn’t get. I had a high school band and we were playing gigs at Whammy. We were 16 and … we were very lucky that nothing happened.

“We were safe and we had support from other women as well, but the thing was that so many of our peers did not have our support and kind of got screwed around a lot by the music industry. It was a bad time.”

She credits Lorde and Haim as examples of young women playing music who are inspiring the next generation to pick up an instrument.

Earlier in the week, to see that they can dance with their instruments and don’t have to look “pretty” on stage, the campers who play bass watched a music video by Haim, whose bassist Este is famed for her expressive face.

We were safe and we had support from other women as well, but the thing was that so many of our peers did not have our support and kind of got screwed around a lot by the music industry. It was a bad time.

Bass tutor Kiki, from the band Hex, says it’s important the campers see people they can identify with, because the typical impression she got early on was one of “some dude noodling on his bass up in his bedroom while his female flatmate does the cleaning or whatever”.

One of the workshops, called “Pretty Smart”, introduced the teenagers to the idea of the beauty myth. When asked to see a show of hands “if you think you look OK”, only half of the group tentatively puts their hand up.

As a slideshow of advertisements depicting slim, white women in minimal clothing was shown, writer Angela Barnett explained all of the digital alterations that had gone into them. Garbage’s Shirely Manson, Lorde and Megan Trainor were held up as examples of female musicians who are rejecting pressures to look a certain way. By the end of the workshop, the campers were loudly expressing their disgust at what they were seeing.

One statistic used in the presentation said that less than 3 percent of advertisements show women as being funny. someone down the front piped up: “Women are hilarious!”

On Saturday in the green room at Ellen Melville Hall, a girl in pigtails and a pink tutu is waiting for the venue to fill up as her fellow campers carrying instruments push past her.

Fourteen-year-old Edie has the quiet confidence of many girls her age – she will shyly observe from afar, but get her talking and her self-assurance and certainty in what she wants is evident. 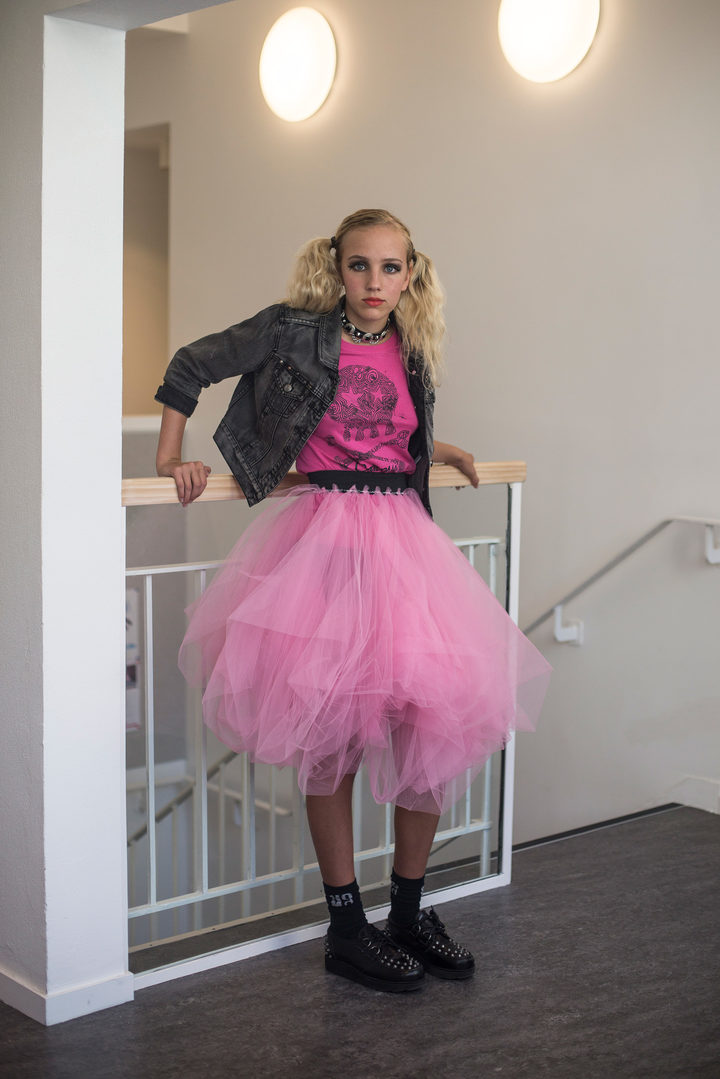 She applied for the camp after being encouraged by her step-dad because he knew she wanted to play rock music, she says.

“At first, when I started going to camp because I was afraid there would be some girls who were kind of elitist about their musical abilities, because they had been doing this longer than me or they might have had some elitism about their music taste or something.”

Instead, Edie says everyone has been welcoming and really nice, and nobody gets picked on because it is “a no judgement zone”.

Edie played trumpet and a little guitar before the start of the week, and this week has been going to the workshops for singers. Tonight she is one of two singers of the band Naughty Corner (sample lyric: “I am a loner and I always will be, I don’t care anymore”), which is why she and her bandmates are dressed in pink and carrying teddy bears. 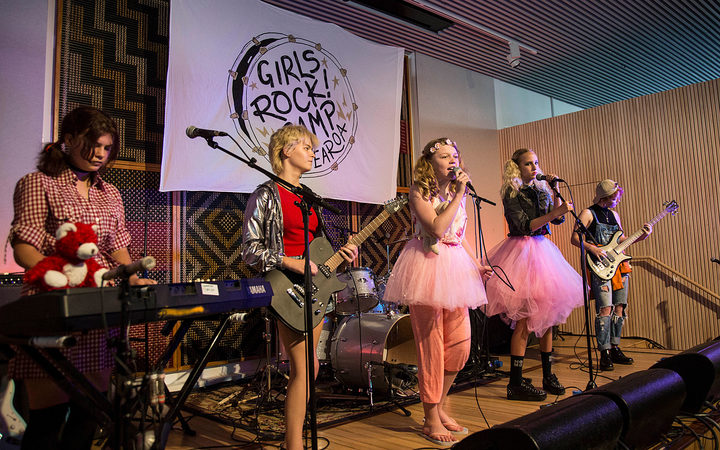 Girls Rock! has given Edie the confidence to pursue a singing career, inspired by her favourite singer, Hayley Williams of Paramore. “I’ve always wanted to sing, but this is my first proper gig. After this, even if the band I’m in doesn’t stay together, I have a friend who does want to start a band with me and we are thinking of getting together for a practice when school starts.”

One of the singing tutors, Rebecca Mason Melrose, who performs professionally as Miloux, would have wanted to go to a Girls Rock! Camp when she was first starting out.

The camp has been important to help the young musicians to let down their barriers, and especially for the girls, to not worry about what they’re wearing or how they look, she says.

“Apart from vocals, it is a very male-dominated industry and I think when you get to a level where you are training specifically in instruments, especially in the rock and pop worlds … I think females aren’t as put forward.

“I think people assume that girls don’t want to do it as much. There were a few workshops when I was a teenager, but they’d always be mixed or held at a boys’ school … it’s just a very male energy.”

A band called Third Twin is opening the showcase with a cover of Lou Reed’s ‘Walk on the Wild Side’, which they mix with a couple of verses from A Tribe Called Quest’s ‘Can I Kick It?’.

When singer Jean gets to the lyric “But she never lost her head, Even when she was giving head”, giggles ripple through the group of campers seated in front of the stage and there are a few raised eyebrows from the parents.

Third Twin was formed by the four musicians in addition to the bands they were separated into, just as a cool thing to do with the friends they had made early in the week. Fresh off the stage, guitarist Zadie, 14, and bassist Pip, 15, are fizzing with adrenaline.

Pip is a little more restrained.

“It was a really good experience. I’m fairly used to it, but it’s something you get addicted to, yeah.”

One of Pip’s highlights of the week was meeting one of her musical idols.

“It was really funny. One of them was my mentor - Cass, who is the bassist for Tiny Ruins. I was such a fan of her and then it turns out she’s my bass teacher and I was like, ‘yusssss!’. I was like fangirling by myself in the background.” 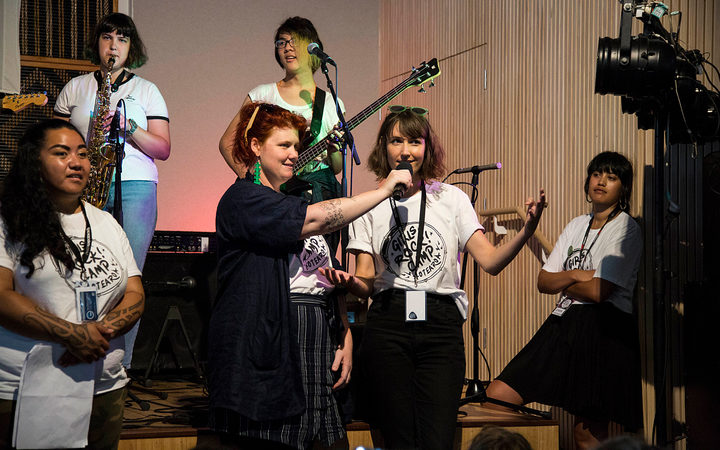 At the start of the week the campers were split into bands based roughly on their age and the instruments everyone wanted to play.

Writing a song with people they didn’t know before the start of the week was a challenge because everyone has different ideas about what the song should be like, Zadie says.

“It’s not something you’re so used to, because normally bands are chosen,” Pip says. “But it’s an amazing experience to go through that creation phase of making a song and negotiating and coming to compromises with people and also having fun at the same time.”

Guitarist Gabrielle, 16, was worried about the culture clash coming into the week. She describes her band, Echo: Reverb (sample lyric: “You shot us down, but we’re back from the rebound”), as “a band of misfits”.

“Somehow we really managed to cooperate really well with each other and use each others’ strengths to create a really good composition. We listened to each other.”

At first, she questioned why her guitar tutor signed her up for GRCA.

“I’m only a little bit into rock, but I was really glad she signed me up without my knowledge, because it helped me be more confident and open-minded with who I’d bond with and who I’d collaborate with.”

She says even though they live in different cities her band has discussed meeting up again, and would recommend others sign up for the next one.

“Even if you’re not into rock as much, it’s good to expand your genres and get new ideas from different people from different backgrounds. I’d encourage anybody to come to this camp.” 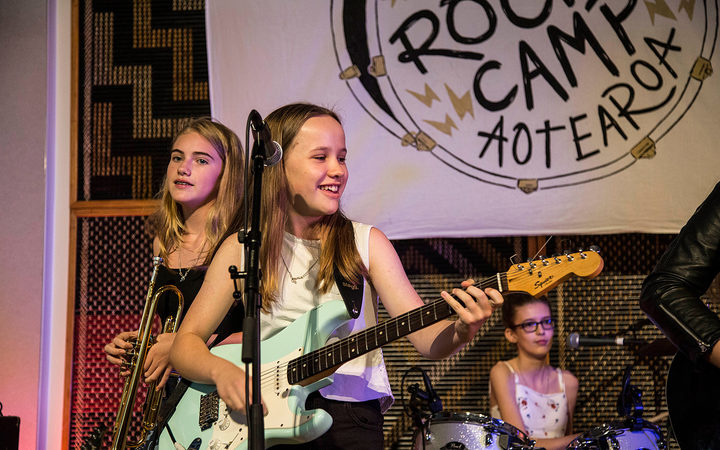 Guitar tutor Henrieta watched the confidence of the campers grow exponentially over the week. “They’re obviously loving it. They can just see how you do it. They’ve seen the process. It doesn’t have that mystery about it anymore.”

She says diversity in the music industry is increasing all of the time, and events like the international Girls Rock! camps are helping to break down barriers into the industry for young people who don’t see representations of themselves up on stage.

“Gender is irrelevant. If you love it, do it, and don’t let anybody tell you you’re not supposed to be there because of the way you are. It should be a completely free thing, free expression. I mean, it’s art, right? That’s the whole point.

“I just really hope more women come up, and they are.” 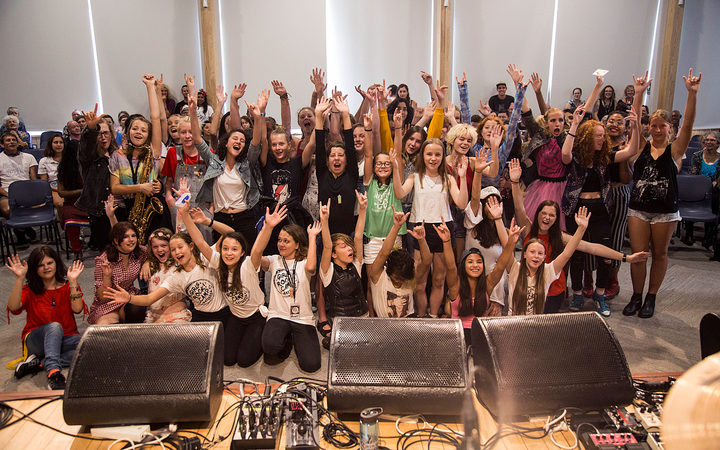