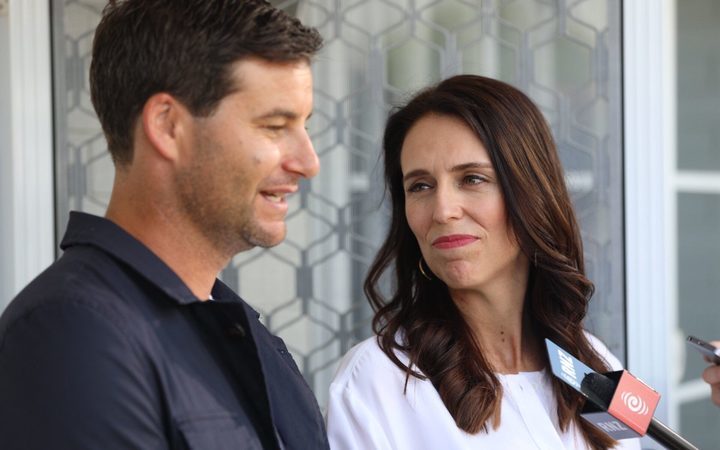 Jacinda Ardern and Clarke Gayford at their first media appearance after the announcement of the Prime Minister's pregnancy. Photo: Dan Cook/RNZ

The Prime Minister of the country is pregnant and her TV presenter-come-fisherman partner is going to stay home with the child. This is what 2018 should look like.

Jacinda Ardern’s baby news has made headlines worldwide and despite some terrible responses, most people are pretty stoked. It feels like a huge stride for equality and another example of New Zealand women leading the way. Plus babies are great! I can testify firsthand having birthed one not long ago (although the birthing part is not so great).

When I first heard the news, my thought went to Ardern’s partner, Clarke Gayford, and how lucky he is to be able to take on the job of primary caregiver.

I really enjoy being a mum full-time and I wish more dads could experience the joy. In our family, we tried to wrangle my husband being at home but financial and workplace barriers didn’t let that happen. And that’s a huge shame because out of the two of us, he’s definitely the more nurturing one. We joke (semi-joke) that if he had boobs, the baby wouldn’t need me at all.

For me, the first signs that imbalance existed in the perceived roles of mothers and fathers came on the day my son was born.

Stay-at-home fathers are not the norm in New Zealand and there’s no good reason why it shouldn't be. There are benefits for men, women and children which in turn is great for society as a whole.

For one, the OECD thinks it could help reduce discrimination against women in the workplace since if men and women are roughly equally likely to take leave, employers will be less reluctant to hire women of childbearing-age. Their research also shows that fathers who care for children early tend to stay more involved as children grow up. Plus children whose fathers participate more in childcare have higher cognitive and emotional outcomes and physical health.

The office of the Prime Minister has confirmed Ardern won't be taking paid parental leave, and neither will her partner Gayford and while their case is unique, Ardern and Gayford have a real chance at tackling the issue for the average New Zealander.

For me, the first signs that imbalance existed in the perceived roles of mothers and fathers came on the day my son was born. My husband rushed from work to be by my side but after our son was delivered, it felt like he was expected to go home.

The nurse at the hospital seemed to think he was an extra in the scene, perhaps not quite understanding how babies are made. My husband wasn’t allowed to lie or sit with me on the bed, he certainly wasn't allowed to stay the night with us. He wasn’t allowed to use the toilet next to our room. He wasn’t allowed to be in the room after 11pm. Here is literally 50 percent of the child, my primary support and partner, who was made to feel like he shouldn’t be there at all.

He felt pressure to go back to work and not burden the other staff with his workload. We also couldn't afford him taking more time off since there’s a mortgage to pay (and a very hungry breastfeeding woman to feed).

Next to us, we heard a nurse tell a new dad that he needed to leave despite the fact that his partner had just given birth via c-section and couldn’t even get up to get her crying baby without someone’s help. This sort of thing isn’t everyone’s experience but it we certainly aren’t the only ones.

We left hospital earlier than we were advised to (our baby had a couple minor complications at birth) but I couldn't face another night alone with a tiny, pooping, crying human and my husband didn't want to be away from his newborn son.

My husband took two-and-a-half days off work; we had the weekend and he was back on Monday. The kicker is, he’s a primary school teacher. His job literally requires him to spend all day with everybody else's kids but we couldn't make it work with our own. He felt pressure to go back to work and not burden the other staff with his workload. We also couldn't afford him taking more time off since there’s a mortgage to pay (and a very hungry breastfeeding woman to feed).

I imagine other families have faced the same difficulty; balancing financial, work and parenting expectations. It’s an incredibly difficult mix which is complicated by the perception that fathers aren’t the ones that should be home with babies, so many don’t try.

Currently in New Zealand a parent is entitled to 18 weeks of paid parental leave, although “paid” is a strong word. You could get as little as $147.50 a week or up to a maximum of $516.85 before tax. At the maximum, a stay-at-home parent is getting $12.90 an hour for the equivalent of a 40 hour work week.

The primary eligibility for paid parental leave lies with the mother. She can transfer all or part of her entitlement to the father, if he’s eligible.

Labour is extending paid parental leave from 18 to 26 weeks by 2020 and while that extension will help, our system leaves a lot of room for improvement. Countries like Sweden are leading the way with new parents entitled to 480 days of leave at 80 percent of their normal pay for the majority of that time.

After the publication of that report, the commission called for fathers to be given their own leave entitlement. According to the OECD, fathers are more likely to take parental leave if encouraged by “daddy quotas”.

This is an area in which New Zealand is seriously falling behind. We’re now in the minority of nations that don't offer even a few days of paid leave specifically for new fathers. Currently dads are entitled to two weeks of unpaid leave compared to countries likes Australia, where two weeks of paid leave for dads was introduced back in 2011.

In Iceland and Sweden, the “daddy quota” of 13 weeks and 10 weeks respectively, has led to a doubling in the number of parental leave days taken by men.

Paid leave for dads is great step forward, however, we could implement all the policies in the world and still not see a change.  In Japan and Korea, for example, one year of paid leave is reserved just for the father — the most generous allowance in the OECD — but very few fathers take advantage of it.  There is a fear that taking extended leave could have negative career implications.

Perceptions and stereotypes of fatherhood need to be challenged, too. Specifically, the idea that babies need their mums at home while dads, who are not as innately nurturing, should keep working.

Nathan Mikaere Wallis is part of the Brain Wave Trust and X Factor Education. He has been a lecturer brain development, language and communication. He says there’s nothing inherent that makes women better parents.

“There is no scientific evidence that I’m aware of that genitalia has anything to do with your ability to parent a baby.”

It’s about attachment and who pays quality attention to the baby. The human brain is more concerned with finding someone who will provide it with intimacy and language rather than the gender of the person, he explains.

“The stereotype isn’t really true. Men are incredibly nurturing and loving and can have sustained, reciprocal interactions with infants.”

Because the expectation that fathers will stay at home with kids isn’t there, employers don’t always encourage it and men don’t always seek it.

Wallis recommends families choose the parent that is most responsive to stay at home and that “employers should be bending over backwards” to make that work.

“We have an infinite amount of research and knowledge that shows attachment is really important. I just think we undervalue those formative years and how fundamental they are to the rest of your life.”

Since my maternity leave is nearly over and I’m keen to get back to work, we tried to organise moving my husband to part time hours so we could share the parenting and working load. While my workplace happily accommodated my part-time hours, his said it wasn’t possible.

Now, perhaps this is just a unique case. But I doubt it. What I expect is that we live in a culture where men are not seen or expected to be primary caregivers and the result is both a lack of policy to support them if they wish to be.  Even things like maternity grants, only available to women who take time off to raise their babies, adds to the perception that taking primary caregiving isn’t a dad’s job. And because the expectation that fathers will stay at home with kids isn’t there, employers don’t always encourage it and men don’t always seek it.

Here’s hoping that Ardern, Gayford, and their pepe can begin to shift policies and attitudes so that families in New Zealand can grow and be nurtured. So that dads are encouraged to stay at home, if that’s what’s best for the family, and mums can continue to run the country.