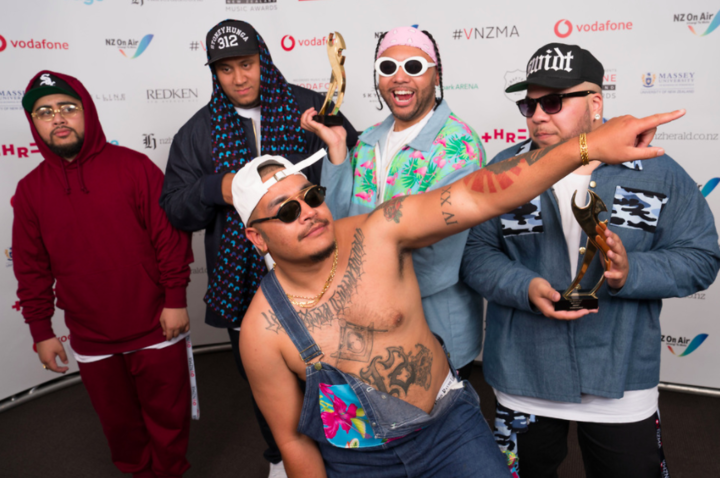 From the return of the Lorde, to the rise of SWIDT, to the eternal persistence of DJ Max Key, 2017's best musical moments were big and bold - but what about the stuff in between? Katie and Hussein go back and forth on a strange and frustrating year in Kiwi music.

Hussein: So, let’s talk about our favourite topic: KIWI MUSIC. What were some of your highlights from 2K17?

Katie: I’m gonna be honest and say it was a patchy year for me. There was stuff I really liked. I thought SWIDT, Mermaidens and some of the newer poppy acts like MAALA and Matthew Young were really good. Obviously, Lorde took up a lot of space but I guess at least that was interesting. But I think just by virtue of doing this column and really trying to seek out interesting NZ music though, I’ve never been more aware of just how slow, tedious and kind of just boring our industry is - not because the artists are bad, but because everything around them is just stuck.

Hussein: Thank god for SWIDT. What would we actually do without them? I was one of the panelists for the Critic’s Choice Prize a year ago and there were people in the room that wouldn’t even take them seriously.

Katie: That’s insane, but also sadly not surprising. For an industry and media landscape that is ostensibly changing extremely fast (look at where SWIDT are now!), it’s pretty damn nuts how much of it - and how many of the people involved - just seem to stay exactly the same.

Hussein: Not to mention how much those people want it to stay the same. Look at this NZ Herald story on ‘The rise and fall of NZ’s music industry’. We’re still stuck talking about how things were better back in the day before piracy ruined everything. Isn’t it time we moved on?

Also, maybe it’s just me, but it seems off to write a massive feature about New Zealand music when the only artist you talked to is Zed who were famous for five minutes almost 20 years ago.

Katie: I love Zed! But I totally see what you mean. I thought that article was interesting - particularly the stuff about the NZ On Air business that led to the NZ music “renaissance” in the early 2000s. I did wonder though how much the distribution model stuff (which, full disclosure, I am too stupid to understand the nitty-gritty of) gets scapegoated for a kind of deeper deficiency that's more cultural than economic. It’s like when Rotten Tomatoes gets blamed for problems in the movie industry - there’s clearly more to it than that.

Hussein: Radio plays a huge part in getting local artists heard, but the reality is that programmers aren’t doing their part. The “voluntary quota” of 20 percent that was agreed to by broadcasters and the government as part of the NZ Music Code hasn’t been met for years, which means that we’re actually hearing less New Zealand music than we did in the past. And if we’re hearing less of it … how are we supposed to expect people to engage with it?

I guess there’s always been this general sort of apathy from the gatekeepers of local music, from radio people that get to choose what gets played right down to the media who seem content to regurgitate whatever it is the publicist tells them without any further thought or effort.

You and I have both been to those new artist showcases this year that NZ On Air throw and I love the idea of them, but you get there and it’s just a bunch of guys getting smashed on free beers and talking loudly over these poor artists who are just trying to make a good impression. [Editor's note - Read NZ On Air's reply: Why NZ On Air Music's artist showcases matter]

Katie: Totally. They also just make me super aware of how insular - and how predominantly male - the industry is. And I think that, even though it’s not visible from the outside, that kind of permeates the culture. No one’s that interested. And you’re right, that goes for the media too - it’s unbelievable how much coverage of local music is just press releases re-published verbatim, news stories about Lorde, or short, boring interviews that are basically puff-pieces.

Hussein: I miss the days of The Neo-Kalashnikovs keeping us critics in check.

Katie: These days you’ve got bloody Mitch James literally trying to sell himself on having “witnessed a stabbing” and the media are just like “yup, ok”.

Hussein: That sort of stuff has never made sense to me. It always feels like what we’re being sold and what we actually want from New Zealand music (and the coverage of it) are two totally different things. I sat through both the Silver Scrolls and the NZ Music Awards this year and the person that everyone was most excited about seeing was Jacinda Ardern. That tells you all you need to know about the New Zealand music industry in 2017.

Katie: Totally! And I think it’s because people can just tell that what’s being presented to them isn’t quite genuine? It’s like how the media narrative around the Silver Scrolls was unanimously just wow women are doing so well! And like, yeah it was great that all the nominees were women. But knowing what we know about how women in creative industries are treated, and seeing how many women come and go in mainstream music because they’ve reached some random expiry date, that stuff just feels disingenuous. How can you say that the same year Gin Wigmore, once one of our most successful artists, is describing how when she got older she was “dropped like a stone”? There’s this drive to recreate Lorde’s success that’s really gone nuts this year - these young, young women like Theia and Nakita and Asti-Loren - which is presented as progress when really it just seems super cynical.

Hussein: And yet this stuff always falls on the artists. It always will. At the end of the day, they're just playing by someone else's rules. How are you supposed to succeed, or even operate, in an industry which was built to disadvantage you?

Then you end up in a room, like I did, with a bunch of people from around the industry and half of them won't even give a group like SWIDT the time of day. It's almost comical.

Of course, SWIDT already know all this. Just about every move they made this year, from the music they produced to the way they chose to release and promote it, spoke to their status as outsiders. They know they can tell their story better than any journalist can, so that's exactly what they did. And of course people listened. Why wouldn't they?

It didn't matter that SWIDT lost out to Scuba Diva at the Critic's Choice Prize last year either. SWIDT outlived both of them anyway. (I'm told that organisers are now re-evaluating the event.) They made so much noise that the industry had no choice but to acknowledge them. It's just too bad that in 2017 this same industry is still playing catch-up when it comes to so much else.