Hang in there for another couple weeks.

The only poll that matters this election has left the voting public with a big question: Will Winston Peters marry up his NZ First party with National, or will he pursue a three-way with Labour and the Greens?

Despite “Jacinda-mania”, the National Party have won 46 percent of the provisional vote (58 seats) to Labour’s 35.8 percent (45 seats). The Greens, Labour’s most likely coalition party, came in with 5.9 percent (7 seats). Oh, and ACT has one seat - Epsom.

With NZ First on 7.5 percent (9 seats), Winnie is the man everyone wants to talk to.

So, if you voted for TOP, Māori, ACT in #decision17 your votes get mostly distributed to National. #BetYouKnewThat

Special votes still need to be counted. Greens usually increase their share, and Labour will be hoping to do the same, but the final numbers are likely to shift only 1-2 percent or one or two seats. That’s not enough to change the hand each party holds. 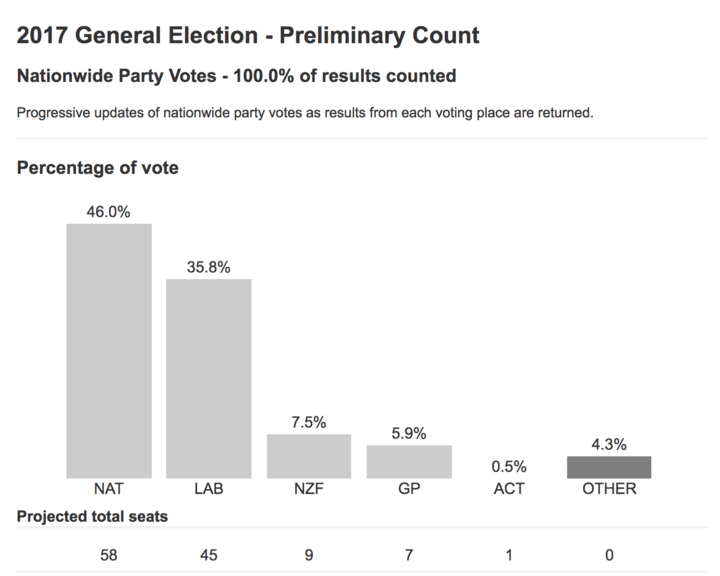 The final count will be released on 7 October.

THE BIG TRADE OFF

Now the nation waits. Forming a government could take two weeks or more.

National will negotiate with NZ First, probably while Labour and the Greens figure out how to work with Winston.

I got back up again, thank you New Zealand. pic.twitter.com/3n30sfETRf

As the last votes were tallied on Election Night, the energised National leader, Bill English, pitched NZ First having a place new forming a “strong and stable” government.

"In the next few days we will begin discussions with New Zealand First, finding common ground, and most importantly, taking on the responsibility of forming the kind of government that will enable New Zealand to get on with its success and that is a strong and stable government for all New Zealanders."

This would be National’s fourth term in government.

"I've come off the field knowing we gave it our all." - Jacinda Ardern addressing supporters. #decision17 https://t.co/yPXxL0LIIy pic.twitter.com/WPi5I2bdcj

Less triumphant, though not conceding, Labour leader Jacinda Ardern said she couldn’t predict what decisions other leaders will make. “The final outcome won’t be decided by us. It will be decided by MMP.”

A smiling Peters was last night not giving anything away when spoke at the Duke of Marlborough Hotel in Russell: "I will not be giving any answers tonight or tomorrow until I've had a full chance to talk to our full board of New Zealand First, our supporters and organisations around the country and our MPs."

But he said a decision would be made either way by writ day - 12 October, in three weeks' time.

Immigration, superannuation, an unmanned re-entry into the Pike River mine, referendum on the Māori seats and support for the regions are all issues he campaigned on.

I'm just gonna hold on to this poster ... in case @winstonpeters sides with National. #decision17 pic.twitter.com/fVkLwKxd5x

Both National and Labour have ruled out giving Winston Peters the prime minister-ship, but deputy PM could be on the table.

Bill English will run a caretaker administration until there’s an agreement in place.

WHAT ABOUT A NATS-GREENS COALITION?

Green voters: you voted for change. You can keep loosing and watch from your moral high ground, or you can work with govt. #decision17

While the math makes it possible, Greens leader James Shaw said his party campaigned on changing the government. His speech last night made an argument for change, saying indications are the three opposition parties will command a majority of votes once the specials and overseas votes have been counted. “New Zealanders have voted for change.”

And he also offered an olive branch to Winston. He highlighted what the parties have in common - a commitment to net zero carbon economy by 2050, renewing the rail network, support for regional economies, and campaigning against low wage economy. “I know we don’t agree on everything, but now is the time we but those differences aside.”

Shaw will be talking to Ardern today. He told RNZ that English was welcome to call him.

BUT WINNIE HAD A LOSS

He will no longer be the MP for Northland. The provisional vote has him 1300 votes behind National’s Matt King in that electorate.

AND THE MĀORI PARTY ARE OUT

A dignified Te Ururoa Flavell speaks after exit of the Maori Party. "I am no longer in the Beehive, but I come home to my beautiful wife."

The party seems to have been hurt by being part of a National-led government and the rise of Māori leaders in Labour, like deputy Kelvin Davis.

the 'seat at the table' philosophy of the Māori party was absolutely toxic. compromising on fundamental principles, desperate for a place.

The final devastating blow was Tamati Coffey winning Waiariki from Māori Party co-leader Te Ururoa Flavell, who will not be standing again.

"I suppose the people's voice has spoken and we just have to live with that," Flavell told RNZ, while also hoping this is not the end of the party.

Swarbrick, who made her name in a campaign for the Auckland mayoralty last year, was hoping the special votes would deliver more Green MPs into Parliament.

"And we're hoping that that also delivers obviously Golriz Ghahraman, but also Mojo Mathers and Barry Coates too," she said.