How the first male to survive the Niagara Falls died after slipping on an orange peel on Queen St. 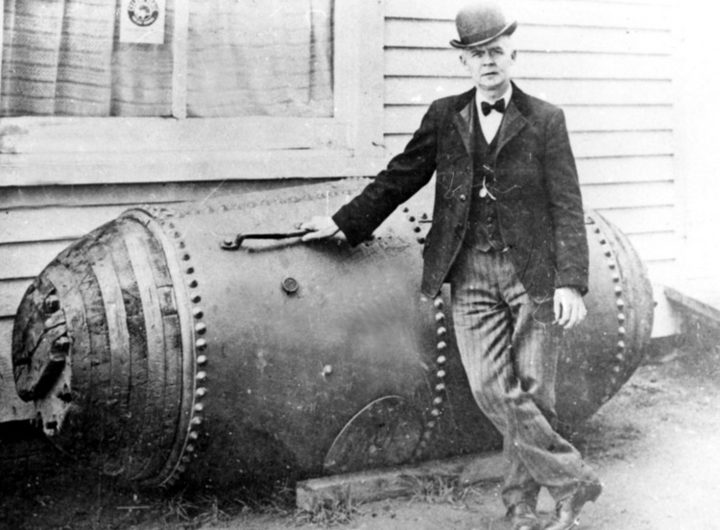 Bobby Leach was a daredevil who parachuted from hot air balloons, climbed rope ladders between speeding aeroplanes and in 1911, went over Niagara Falls in a barrel.

He died in Auckland in April 1926, aged 69, after slipping on an orange peel on Queen St, and is buried in Hillsborough cemetery. The Auckland Star newspaper published an obituary from the San Francisco Bulletin, which they cynically called “pithy.”

“There is an old saying that he who is born to be hanged will never be drowned, and it is said that many a storm tossed mariner has found some comfort in that thought.

“The adage comes to mind when learning that Bobby Leach, who went over Niagara Falls in a barrel, without suffering a scratch, has just died in far-away Auckland, New Zealand, of injuries received when he slipped on a piece of orange peel.

“Fate spared him at Niagara Falls only to meet him years later in a simple fall of no more than his own height.” 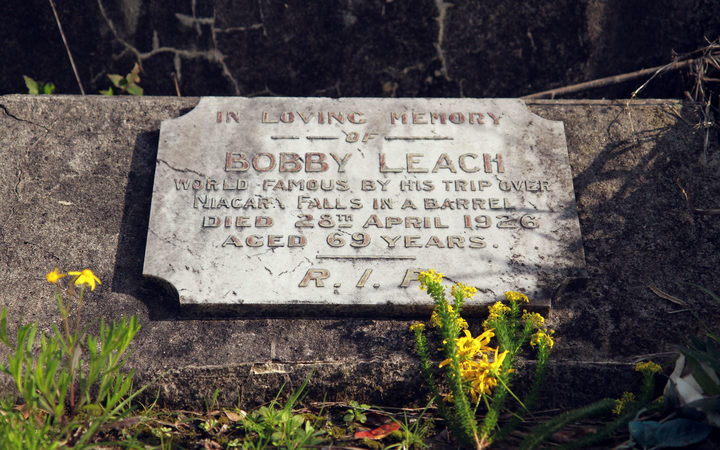 According to his death certificate, Robert Leach was born in Manchester in about 1857. In an obituary in the NZ Herald, he is said to have moved to the United States as an 18-year-old.

By then, he was an “expert swimmer” and began his showmanship career in the Barnum and Bailey’s Circus (The Greatest Show on Earth!) performing “high diving feats and giving exhibitions of trick swimming”.

In 1909 he dived off the 63 metre-high Honeymoon Bridge into the Niagara River [some accounts suggest he jumped off the bridge with a parachute, which seems more likely to me]. In 1910 he went through the rapids leading up to the falls in a barrel, but got stuck in a whirlpool and had to be rescued.

But it was his trip over the falls in 1911 for which he is most famed.

Leach wasn’t the first person to go over Niagara Falls in a barrel. That feat was achieved by teacher Annie Edison Taylor, on October 24, 1901 - her 63rd birthday.

According to Taylor’s biographer Charles Carlin Parish, she did so to avoid the “poor house”. But before she performed the feat herself, she padded an oak and iron barrel with a mattress and sent a cat over the falls inside it. The cat survived [thank goodness] despite a bleeding head, and posed with Taylor for a photo afterwards [sad face].

After her own trip over the falls, Taylor told media: “If it was with my dying breath, I would caution anyone against attempting the feat. I would sooner walk up to the mouth of a cannon, knowing it was going to blow me to pieces than make another trip over the fall.” 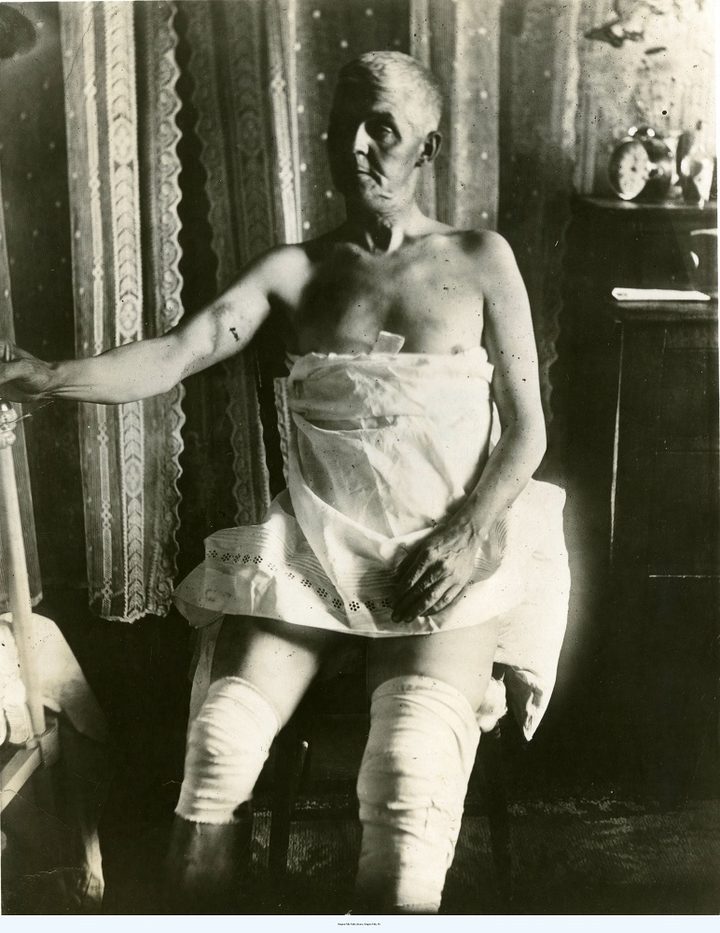 Leach’s barrel was actually more of a steel drum. On July 25, 1911, from the New York side of the river (Canadian police had banned him from performing the stunt) he went over the largest of three waterfalls on the Niagara River - the 51 metre high Horseshoe Falls.

Though the obituary in the San Francisco Bulletin said Leach didn’t suffer a scratch, he actually broke both his kneecaps, several ribs and his jaw, and spent five months in hospital. 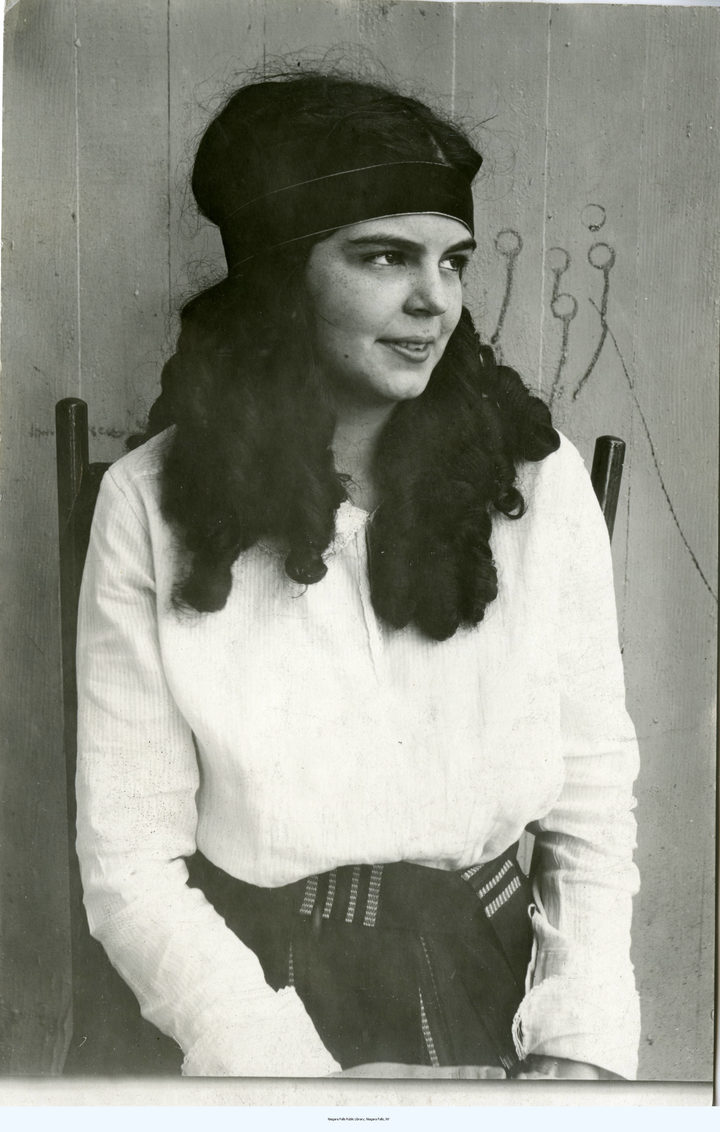 After his recovery, he toured, with his barrel, throughout the US and Europe.

According to the Herald, there “can be little doubt” that the Niagara-incurred injuries led to the weakening of his leg that was broken on that fateful day in Auckland on February 26, 1926. But according to his death certificate, the cause of his death two months later was osteitis fibrosa (weakened bones) and sarcoma of femur (bone cancer).

Leach had been on a speaking tour of New Zealand for four months, accompanied by his beloved wife Sadie and his 17-year-old daughter Pearl. In February, they were staying in a flat on Auckland's Princes St, when the orange peel incident occurred. 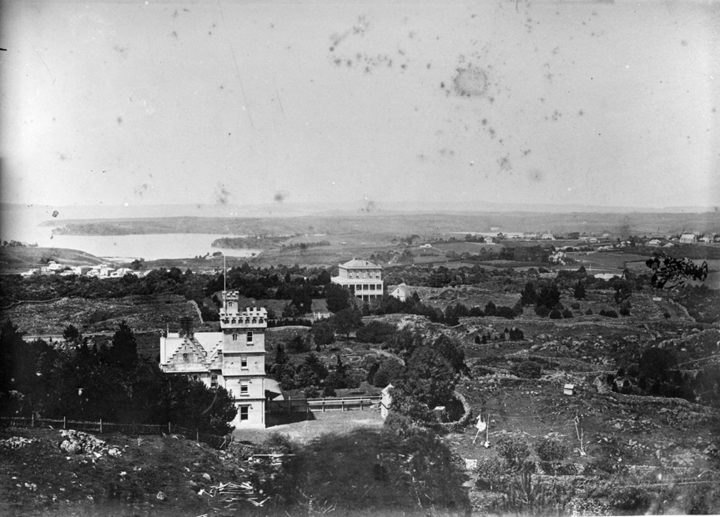 After “complications set in,” Leach’s leg was amputated, and he did not recover, dying on April 28, 1926, at Mater Misericordiae Hospital in Mt Eden. Two days later, on a Friday afternoon, his body was taken from Messrs C. Little and Sons Funeral home at 209 Hobson St, to Hillsborough Cemetery, where he remains today.

Today, a trip from Hobson St to Hillsborough Cemetery, via motorway and the Waterview Tunnel, takes about 15 minutes, or maybe 25 if you meander through the suburban streets of Auckland.

In Leach’s day, trams ran up and down Dominion Rd, Hillsborough would have been farmland, and his coffin would have been transported in the Daimler hearse that was owned by the funeral home which remains in the Little family today.

His simple concrete grave is on a sunny hillside, overlooking the Manukau Harbour, across to Mangere Bridge. A faded fabric flower which used to be blue lies beside a white marble plaque. Maybe it was placed there by a visiting relative? Maybe Pearl had a family of her own.

The inscription on the plaque reads “In loving memory of Bobby Leach. World famous by his trip over Niagara Falls in a barrel. Died 28th April aged 69 years. R.I.P.” 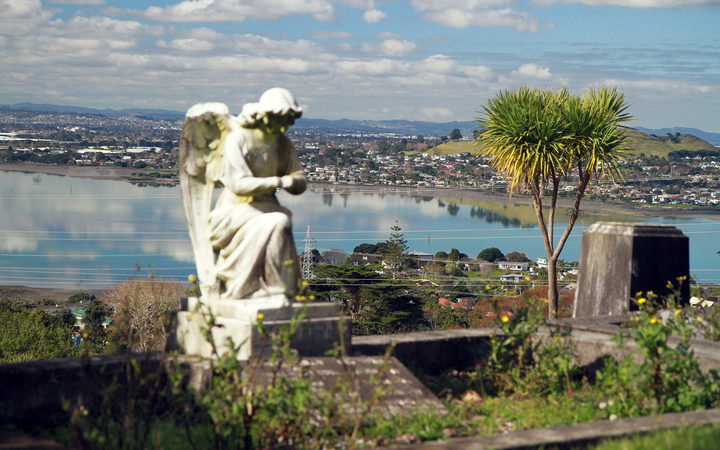